This is very good news

The AstraZeneca/Oxford vaccine offers 76 per cent protection from Covid-19 for the full three month period between the first and second dose, a new Oxford University shows.

END_OF_DOCUMENT_TOKEN_TO_BE_REPLACED

Sky News journalist Scott Beasley posted a breakdown of the key information in a Twitter thread.

He explained that analyses show the 76 per cent efficacy of the first dose is sustained from the 22nd day after the first jab, to the full three month mark.

With the three month interval between doses being used in the UK, the second dose boosts the vaccines efficacy to 82.4 per cent.

▶️ After the second dose vaccine efficacy from two standard doses is 82.4% with the 3-month interval being used in the UK

There has been much scepticism around the three month interval, but the Oxford study backs up Aztrazenca's belief that it is the most effective procedure. 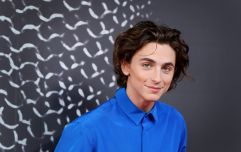 Timothée Chalamet admits to having a secret YouTube channel

END_OF_DOCUMENT_TOKEN_TO_BE_REPLACED

In fact, a longer gap between doses appears to increase the jab's efficacy. The study shows that a six-week interval provides a 54.9 per cent efficacy, while it rises to 82.4 per cent when each dose is 12 weeks apart.

And most crucially the vaccine does stop transmission of the coronavirus.

"Analyses of PCR positive swabs in UK population suggests vaccine may have substantial effect on transmission of the virus with 67% reduction in positive swabs among those vaccinated," he tweeted.

Professor Andrew Pollard, Chief Investigator of Oxford Vaccine Trial, co-author of the paper, said: "These new data provide an important verification of the interim data that was used by more than 25 regulators including the MHRA and EMA to grant the vaccine emergency use authorisation.

"It also supports the policy recommendation made by the Joint Committee on Vaccination & Immunisation for a 12-week prime-boost interval, as they look for the optimal approach to roll out, & reassures us that people are protected from 22 days after a single dose of the vaccine."