An anti-mask protestor in the US state of Utah has claimed that being forced to wear a face mask to protect against COVID-19 makes her feel like George Floyd taking his last breaths.

St George resident Shauna Kinville made the remarks as she attended an anti-mask rally outside a school district board last month.

The full news report has since been shared on social media.

46-year-old Floyd was killed in Minneapolis when police officer Derek Chauvin knelt on his neck for over eight and a half minutes during a routine arrest.

Floyd was captured on camera gasping and muttering the words 'I can't breathe' moments before he passed away. Floyd's death sparked international outrage and a wave of ongoing anti-racism protests in America.

Protesters confront police outside the 3rd Police Precinct on May 27, 2020 in Minneapolis, Minnesota. (Photo by Stephen Maturen/Getty Images) 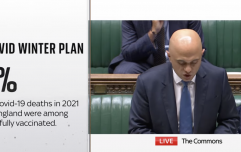 END_OF_DOCUMENT_TOKEN_TO_BE_REPLACED

Chauvin and three other Minneapolis police officers were subsequently fired from their jobs.

Chauvin in particular has since been charged with murder. He first appeared in court two days ago, and was heckled by onlookers as he made his way inside the building.

Kinville's George Floyd remark wasn't the only baffling statement made in ABC4's news report, however.

END_OF_DOCUMENT_TOKEN_TO_BE_REPLACED

A child, ostensibly repeating what an adult had told him, said: "Flu kills more people than Coronavirus."

The World Health Organisation have previously dismissed this line of argument, stating: "While many people globally have built up immunity to seasonal flu strains, COVID-19 is a new virus to which no one has immunity. That means more people are susceptible to infection, and some will suffer severe disease.

"Globally, about 3.4% of reported COVID-19 cases have died. By comparison, seasonal flu generally kills far fewer than 1% of those infected."

An elderly woman in the news report said: "Let me tell you why I hate masks - they're contaminated. I'll tell you another reason I hate masks. Most child molesters love them!"