The Greater Manchester mayor, Andy Burnham, is demanding compensation from the Scottish government after they implemented a sudden travel ban specific to areas of Greater Manchester and Lancashire, where coronavirus cases are currently rising. 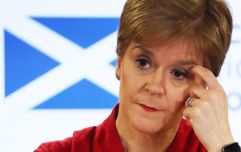 END_OF_DOCUMENT_TOKEN_TO_BE_REPLACED

The announcement was dropped this past Friday, with the travel ban coming into effect on Monday. However, Burnham has criticised Nicola Sturgeon, saying the decision was "announced out of the blue" and "completely disproportionate".

Speaking to Andrew Marr, the mayor stated: "That is exactly what the SNP always accuse the Westminster government of doing - riding roughshod over people.

He added, "The SNP are treating the north of England with the same contempt in bringing that in without any consultation with us.", before declaring, "I just think it's double standards, it's hypocrisy."

As mentioned in The Scotsman, some of the frustration surrounding the decision is partly because the areas identified as Covid-19 hotspots, despite figures in the cities matching case rates in parts of Scotland.

As well as arguing that different arrangements could have been made "if the first minister had been in touch with us", Burnham went on to say he would write to the First Minister and ask for the Scottish government to compensate local people who had planned to travel to Scotland and businesses that could lose bookings and money.

The 51-year-old Labour MP raised the question, "Why should a couple from Salford - who are double jabbed - who are about to go on a walking holiday in Scotland, not be able to go?"

He finished his interview with Marr on a strong statement:

"The Scottish government can't just impose things on parts of the north of England with no discussion with us - that is simply wrong and they need to live by the same standards that they always call from others."

The Scottish trade minister, Ivan McKee, has defended the decision, stating: "The virus, as we know, moves very fast, decisions are made very fast and those decisions are communicated at a four-nations level".

He did concede however that there will be government discussions on how to keep the region better informed in the future. Conversely, Scottish Conservative leader, Douglas Ross, noted the decision was made on Thursday, "yet it wasn't announced until over 24 hours later".

He took the opportunity to criticise McKee and the administration for not exercising a "good enough dialogue" in the "24 hours that passed before anyone in Greater Manchester knew of a decision".