There are enough Tory MPs to collapse the government and prevent a no-deal Brexit, Amber Rudd has warned the Conservative leadership candidates, after Boris Johnson and Dominic Raab this week threatened to push through the UK's withdrawal with or without a deal. 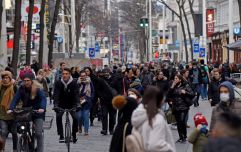 Austria threatens to lockdown the unvaccinated as Covid cases soar

END_OF_DOCUMENT_TOKEN_TO_BE_REPLACED

The work and pensions secretary, who is backing Jeremy Hunt's campaign to takeover the reigns of the party, claimed to BBC Radio 5 Live on Sunday that a "number of colleagues" would be willing to bring down their own government rather than allow Britain to exit the EU without an agreement.

Asked on Pienaar’s Politics if the numbers were "easily there" for a vote of no confidence in the government, Rudd replied: "I believe they are, yes."

Although she insisted she would not vote that way herself, she added: "There are a number I know of privately who say that, so any candidate needs to factor that in as well into their strategy for the next few months."

Michael Gove, Sajid Javid, Rory Stewart and Hunt have all committed to leaving the European Union, however, they have not specified a cut off date of 31 October like Johnson and Raab, who have refused to rule a no-deal Brexit out.

Rudd also described the idea of asking the Queen to suspend parliament in order to force through a no-deal Brexit, which has been touted by Dominic Raab, as "absolutely outrageous".

"The idea of leaving the European Union in order to take back more control into parliament and to consider closing parliament in order to deal with that is the most extraordinary idea I've ever heard," she added.