Amber Heard said the incident happened in March 2015 in Australia

Amber Heard was visibly shaken on the stand and broke down as she detailed how Johnny Depp sexually assaulted her with a liquor bottle during emotional testimony that the actor's defense team later labelled the "performance of her life". END_OF_DOCUMENT_TOKEN_TO_BE_REPLACED

Heard detailed the alleged assault that took place in Australia in March 2015 at their rented home Depp was living in while filming Pirates of the Caribbean 5. During the same incident, Depp's finger was severed, with the actor claiming that his ex-wife had caused it by throwing a liquor bottle.

Depp is suing Heard over an op-ed she wrote in 2018 in which she discussed the subject of domestic abuse. Depp's lawyers argue that the Washington Post piece falsely implies that Heard was physically and sexually abused by Depp while they were married from 2015 to 2017. He is seeking $50m in damages. Heard is counter-suing for $100m

In her testimony, Heard said she did not see Depp's fingertip being cut off. "At some point he's on top of me, screaming I f**king hate you, you ruined my f**king life," she told the court.

WATCH: #AmberHeard breaks down on the stand while testifying about an alleged sexual assault incident involving Johnny Depp in Australia in 2015. @LawCrimeNetwork pic.twitter.com/vaPH5v2Seq

#JohnnyDepp appeared to look at his attorney after #AmberHeard responded to her attorney's question about an alleged bottle penetration incident. @LawCrimeNetwork pic.twitter.com/p3OHRf4iGQ

"I'm on the countertop, he had me by the neck and was on top of me," she continued. 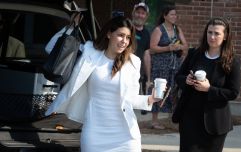 END_OF_DOCUMENT_TOKEN_TO_BE_REPLACED

Heard said her head was "bashing against the back of the bar and I couldn't breathe". She also said she "couldn't get through to him. I couldn't get up".

It was at this point that Heard became deeply emotional.

Heard later said her next memory was being in the bathroom, "I remember retching, the sound my voice was making. I lost control of my bladder. I remember just retching, there was blood on the floor."

In a statement, Depp's team claimed that Heard's evidence has evolved as the case has continued to contain "'new and convenient details".

“His truth - the truth – is the same no matter the environment in which it is has been presented..”