Amazon have removed a listing from its website that described a pair of brown shoes as 'n****r-brown' after David Lammy MP made a complaint.

Posting on Twitter, Lammy wrote: "Just buying brown brogues tonight leads to this racist micro aggression. Is it 2020 or 1720? Please @amazon take it down."

Attached was the following screenshot from Amazon.


The listing was removed, but Lammy followed up by asking: "Given the item has been on sale since March what systems do you have in place for reviewing descriptions and not allowing offensive terms to be posted in the first place? This is not the first time." 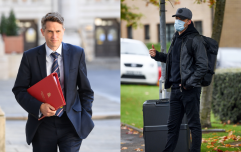 All students will be able to go home for Christmas, Gavin Williamson confirms

END_OF_DOCUMENT_TOKEN_TO_BE_REPLACED

An Amazon spokesperson told The Independent: “All sellers must follow our selling guidelines and those who do not will be subject to action including potential removal of their account. The product in question is no longer available.”

The removal of the listing from Amazon came shortly after Lammy had posted a screenshot of a vile racist tweet he had been sent, describing the Shadow Justice Secretary as a "monkey boy" and threatening that the Tottenham MP would be "hanging from a lamppost".

Lammy called on Twitter to be more effective at dealing with racism on the platform, saying: "Tell me racist abuse is not welcome on your platform. You need to get so much faster at removing hate."

The account that sent the tweet to Lammy appears to have been suspended. The Metropolitan Police are aware of the incident.


popular
Planks are one of the worst ab exercises, says Triple H's personal trainer
BBC to take away stars' Twitter accounts if they breach impartiality guidelines
Jamie Carragher launches scathing attack on Fulham's director of football
First photos of Princess Diana and Margaret Thatcher in The Crown revealed
QUIZ: Name the obscure characters from The Simpsons (Part Three)
All students will be able to go home for Christmas, Gavin Williamson confirms
Test your knowledge with the FootballJOE 2000s Quiz

You may also like
News
Brexit: Lorries will need permit to enter Kent from January
News
Two police officers shot during Breonna Taylor protests in Louisville
News
Mars to change name of Uncle Ben’s rice from next year
News
Plastic face shields don't work at protecting you from coronavirus
Entertainment
The Great British Bake Off returned with hilarious parody of Boris Johnson
Next Page