Five Tory ministers and the party's vice-chair were among those who voted in favour of a private member's bill on Tuesday afternoon to legalise abortion in Northern Ireland.

END_OF_DOCUMENT_TOKEN_TO_BE_REPLACED

A total of 208 MPs to 123 voted in favour of backbench Labour backbencher Diana Johnson's bill, which is unlikely to become law, but that highlights support in the Commons for bringing the law in Northern Ireland in line with the rest of the UK. Abortion has been legal in England, Scotland and Wales since 1967.

The vote sees the ministers coming at odds with Theresa May, who personally believes women "should be able to access safe, legal abortion" but has insisted the decision on a change in the law should be made by the Northern Ireland executive. The matter is complicated by the collapse of the power-sharing deal in Stormont in January 2017, and by the fact the anti-abortion DUP in a confidence-and-supply agreement with the Conservative government.

The speech I made earlier proposing my Abortion Bill to decriminalise abortion in England, Wales and Northern Ireland is at https://t.co/6lHCAJW3Hq. The @HouseofCommons voted 208-123 in favour. #nowforNI #wetrustwomen pic.twitter.com/M2kAaPjvFe

END_OF_DOCUMENT_TOKEN_TO_BE_REPLACED

Speaking in favour of the bill, Diana Johnson told the Commons: “Abortion in our country is underpinned by the oldest legal framework for any healthcare treatment, with the harshest criminal sentence in the developed world for women having an illegal abortion.

“Our current abortion law dates back to the Offences Against the Person Act 1861 – a time when Queen Victoria was on the throne and women were still decades away from getting the right to vote.”

Opposing the bill, Tory MP Fiona Bruce told MPs: "Whatever members' differing views on abortion, if we respect devolution we should vote against this motion today. 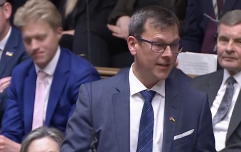 END_OF_DOCUMENT_TOKEN_TO_BE_REPLACED

"It proposes far-reaching changes in abortion law not only for England and Wales but also for Northern Ireland, where abortion has been respected as a devolved matter since 1921. "Indeed it would set a dangerous constitutional precedent of interference and it's not only unconstitutional, it's untimely.

"At such a sensitive time in relations between the Westminster government and the Northern Ireland administration, it would completely undermine the substance and spirit of the Good Friday Agreement."

However, Ruairi Rowan, senior advocacy officer at the Family Planning Association, told JOE.co.uk that it was time for the government to make to "bring abortion law into the 21st century" by passing the bill.

"For 30 years FPA has provided a pregnancy choices counselling service in Northern Ireland," he said. "Every day we see the devasting impact that restrictive abortion law has on women and their families. The vote today shows strong cross-party support for the urgent need to change the law."

popular
Fake Instagram posts Coleen Rooney used to 'sting' Rebekah Vardy revealed in Wagatha Christie trial
Man arrested after Sheffield United's Billy Sharp attacked by Nottingham Forest fan
UK drivers shocked over car park that fines people even if they don't park
Amber Heard: 'I survived. I survived that man and I’m here'
Amber Heard says her sister taught Johnny Depp to snort cocaine with a tampon
Martin Skrtel retires from football due to health reasons
Wagatha Christie: Wayne Rooney describes 'awkward' moment he asked Jamie Vardy to get his wife to 'calm down'
You may also like
News
Chinese spy has been working with MP in UK parliament to 'subvert processes', M15 warns
Politics
MPs warned to be on standby for vote on new restrictions in Christmas week
News
MPs declare China's treatment of Uighurs as genocide
News
MPs to spend longer paying tribute to Prince Philip than they did scrutinising Brexit deal
News
Parliament U-turns on exempting its own bars from 10pm curfew
Next Page