There's no escapism from the stresses of daily life quite like a good sit-down on the toilet.

Some of the best thinking happens on the can, when you're able to slow down and take stock. It can be a zen-like experience in the right situation.

However, one mind-blowingly unfortunate Thai man will never be able to enjoy a trip to the toilet again, after a giant python slithered up through the plumbing and sunk its teeth into his, well, guess.

Attapom Boonmakchuay unsurprisingly lost a lot of blood when the 3m (10ft) snake grabbed hold of his penis and attempted to pull him into its new lair.


"I felt as though my penis had been severed," he told the Bangkok Post. "The snake was yanking very hard." 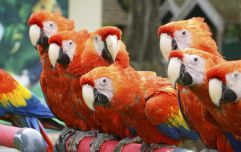 END_OF_DOCUMENT_TOKEN_TO_BE_REPLACED

It sounds like something from a horror movie, but it really happened. Attaporn had been squatting over the toilet in his Thailand home when the serpent rose from the water and clamped its jaws around his manhood.

He screamed out for his wife and the pair of them thrashed around the blood-spattered bathroom in panic as they tried to wrestle it off. They told Thai TV that they eventually managed to tie a piece of rope around its head and prise the poor bloke free, but only seconds before he would almost certainly have passed out.

Attapom is now in a stable condition in hospital and doctors have reportedly said he's making a good recovery - considering.

As for the python - the plan is to release it back into the wild, but the male population of Thailand is surely collectively holding its breath that it hasn't developed a liking for human dick.

You may also like
Life
Lonely at Christmas, one man and his loving dogs
Entertainment
Furst Dates: Going speed dating with dogs
Life
How to keep your dog safe during a heatwave
Entertainment
There is a Dog Cosplay event coming to the UK, if you want to dress your dog up as Iron Man or Darth Vader
Entertainment
You can buy beds for your pets shaped like the Iron Throne
Next Page