Nearly 40 per cent of students in England had grades downgraded

Approximately 280,000 A-Level students had their grades downgraded after exams were cancelled earlier this year due to the Covid-19 pandemic.

According to data from Ofqual, 39.1 per cent of students in England were given lower grades than expected, while the proportion of students given an A or A* grade rose to 27.1 per cent.

Education secretary Gavin Williamson said that boosting grades for this year's A-Level students would "harm them for life", presumably speaking from experience of being promoted to a job beyond his level of competence.

With no exams taking place, teachers were asked to submit the grade they predicted students would attain had they sat the exam, alongside a ranked order of students predicted scores. The exam boards then moderated these grades to ensure they weren't unrealistically higher or lower than previous years.

Students in England can use their mock grades as the basis of an appeal if they are not happy with the grades they have been given by the algorithm.

Universities are also expected to soften admission rules following the news this morning.


Geoff Barton, general secretary of the Association of School and College Leaders (ASCL), said: "While there has been an overall increase in top grades, we are very concerned that this disguises a great deal of volatility among the results at school and student level. 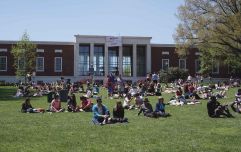 Uni students in Scotland told not to go to pubs, parties or restaurants

END_OF_DOCUMENT_TOKEN_TO_BE_REPLACED

"We have received heartbreaking feedback from school leaders about grades being pulled down in a way that they feel to be utterly unfair and unfathomable. They are extremely concerned about the detrimental impact on their students."

He added: "We are now calling on the government and the exam regulator Ofqual to review the situation as a matter of urgency, and we would warn them against simply digging in their heels, and insisting all is well."

But Gavin Williamson says the government will be making no such changes.

"We're not going to be changing this system again,' he told Times Radio.


popular
Manchester United target Alex Telles pleads with Porto to lower asking price
QUIZ: Guess the footballer from their Wikipedia page #11
QUIZ: Is this a Marvel character, or a DC Comics character? Part 2
MATT JUDGE: A day in the life of Man United's chief negotiator
Highest number of new Covid-19 cases recorded in one day since outbreak began
Donald Trump refuses to promise he will leave office peacefully
You won't get top marks in this football stadium quiz