At least 59,000 Americans actually voted for Kanye West as President

Yeezy got some votes, at least

While the battle for the US Presidency between Joe Biden and Donald Trump remains on a knife-edge as votes continue to be counted, spare a thought for those who are definitely out of the race. Candidates like Kanye West. 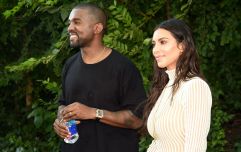 Kim Kardashian files for divorce with Kanye West, according to reports

END_OF_DOCUMENT_TOKEN_TO_BE_REPLACED

Kanye West appeared on the ballot in twelve US states, and now we know how many people actually voted for him.

In maybe the most important Presidential election in living memory, at least 59,731 people choose to cast their vote for the rapper.

Vulture broke down the tally of Kanye-voters by state. Tennesse appears to have the most Kanye-boosters, with over 10,000 people voting for West.

Here is the full break-down by state: END_OF_DOCUMENT_TOKEN_TO_BE_REPLACED

Kanye West also appeared on the ballot in California, as the vice-presidential choice of the American Independent Party’s Roque De La Fuente (though Vulture say it is not actually clear if Kanye himself endorsed that). De La Fuente received 0.3% of the vote in the state.

Late on Tuesday night, in a tweet that has since been deleted, West posted a picture of himself against a backdrop of a map of the United States, which illustrated the states that had been won by Biden and Trump.

The picture was posted with a caption that read "WELP" – a word typically used to convey resignation or disappointment – and 'KANYE 2024'.

He has since tweeted it again - but this time without the "WELP".

popular
Man Utd defend decision to make 10 minute flight to Leicester for Premier League clash
Shocking footage shows moment man is killed by his own brothers
Gary Lineker donates £3000 to help Doncaster Rovers Belles player pay for surgery
Jurgen Klopp takes another dig at BT Sport for lunchtime kick-off
Addison Rae banned from TikTok
The Batman trailer has just dropped and it looks absolutely unreal
The JOE Friday Pub Quiz: Week 265
You may also like
Entertainment
Peppa Pig trolls Kanye after album gets better review than Donda
Entertainment
From Becky with the hair to Kanye's Hurricane 'confession' - how cheating sells records
Entertainment
Kanye West sets himself on fire during Donda listening event
Music
Kanye West has become the richest black man in American history
Music
QUIZ: How well do you remember the music of 2020?
Next Page