Activists in Australia are working to ensure that the 20-foot "angry baby blimp" depicting Donald Trump that flew during the US president's recent "working visit" to Britain will be brought Down Under, to coincide with his visit later this year. 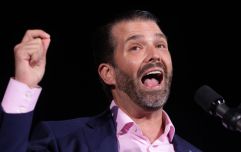 END_OF_DOCUMENT_TOKEN_TO_BE_REPLACED

The balloon was flown amid widespread protests during Trump's stay in the UK with the president going so far as to claim the blimp made him feel "unwelcome" in the nation's capital.

Although the exact date of Trump's visit to Australia is yet to be confirmed, it is expected he will travel there after he attends the Apec summit in Papua New Guinea in November. Australia's prime minister, Malcolm Turnbull, invited Trump to the country when the pair met in February.

The planned Australian protest - that calls itself United Against Trump - is expected by organisers to be similar in scope and scale to the protests held in the UK. Organiser Simone White told the Guardian: “We’re expecting an absolutely enormous protest. We are expecting this could be one of the biggest protests in Australia in a long time. Our goal, like the goal of the protesters in the UK, is to make Trump feel like he is not welcome here.”

With the plan to take it Down Under, it looks as if the blimp will become a enduring feature of  Trump protests going forward. The original London blimp was created following a crowdfunding project, with over £30,000 donated, and activists in America have already raised funds to have a replica to be brought across the Atlantic.

"Donald Trump is a big, angry baby with a fragile ego and tiny hands," original crowdfunding page said. "He's also racist demagogue who is a danger to women, immigrants and minorities and a mortal threat to world peace and the very future of life on earth."