As well as being a rapper, producer and mastermind of The Wu-Tang, Robert Diggs aka The RZA is also now an established film director. 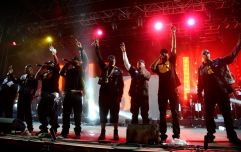 END_OF_DOCUMENT_TOKEN_TO_BE_REPLACED

His first movie The Man With The Iron Fists was the kung fu extravaganza you would expect from the RZA, but his follow up, the musical drama Love Beats Rhymes, showed there was more to his talents than just aping old Shaw Brothers flicks.

Now he is back with his third film, Cut Throat City (out now on VOD), a sprawling crime drama set in 2005 in New Orleans, in the aftermath of Hurricane Katrina. Shameik Moore (the voice of Miles Morales in Into The Spider-Verse) leads a stacked cast that also includes Ethan Hawke, Wesley Snipes, and Terrance Howard.

We caught up with The RZA to talk about the film and its unintended resonance with the current coronavirus pandemic.

But we couldn't chat to The RZA without bringing up kung fu films, so we also got him to pick the top five martial arts movies he would take to a desert island. The RZA shows of his wide knowledge to Asian action cinema, picking some classic movies from the 1970s, alongside newer movies starring martial arts icons like Jet Li and Tony Jaa.

He also shares a story of running a video rental store with Ghostface Killah in the pre-Wu-Tang days.

Cut Throat City is available on Digital Download now. The official synopsis for the film reads: "When four boyhood friends return to New Orleans' Lower Ninth Ward after Hurricane Katrina, they find their home decimated and prospects for work swept away. Turning to a local gangster for employment, the crew is hired to pull off a daring casino heist, right in the heart of the city."