The rock'n'roll legends will play dates up and down the country.

The Rolling Stones have announced a huge tour of UK and Ireland this summer.

NO FILTER! The news you’ve all been waiting for! The Rolling Stones are bringing the No Filter tour to the UK and Ireland this summer, with some additional European shows! #TheRollingStones #StonesNoFilter #Tour pic.twitter.com/MOLN1u7m8Y 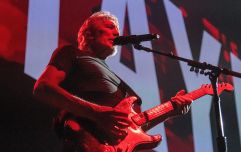 END_OF_DOCUMENT_TOKEN_TO_BE_REPLACED

The bands will play a show at Dublin’s Croke Park on 17 May, followed by London Stadium on 22 May, before heading to Manchester’s Old Trafford Cricket Ground on 5 June.

They will then travel to Scotland and Wales, playing at Edinburgh’s Murrayfield Stadium on 9 June and Cardiff’s Principality Stadium on 15 June.

The tour's finale will see them head back to London to play Twickenham Stadium on 19 June.

The last time they played a tour date in the UK was at London's Hyde Park in 2013.

popular
Two British men raped in Spain after being 'drugged while out on night out'
Groom shocks wedding by playing video of his bride cheating with her brother-in-law
Study finds women have three types of orgasm - including 'the volcano'
Man has hand 'chopped off' outside working men's club in attack like 'a horror film'
Unbelievable moment plane crash lands on California highway before bursting into flames
Runner finishes last in 400m race as penis keeps falling out of shorts
Brit tourist, 22, ‘raped by wealthy American holidaymaker in hotel toilet’ in Mykonos
You may also like
Entertainment
Adele breaks down as she postpones Las Vegas residency day before show
Music
Dido's first tour in 15 years will include three UK dates
Music
Elton John announces Farewell Yellow Brick Road UK tour dates
Music
Ranking every Spice Girl from least to most excited about the reunion tour
Music
Ella Mai has announced her very first headline UK tour dates
Next Page