We're certainly willing to give this experiment a shot.

Researchers led by Dr. Felipe Carvalho of the Vrije Universiteit in Brussels have found that your perception of both the strength and the taste of your beer can change depending one what you're listening to at the time.

In the study, subjects were asked to drink beer while exposed to three different sound stimuli and report on the flavour and taste. Participants were not informed that they were drinking the same beer every time.


The study found that light, Disney-style music correlated to the participants perceiving their drink as lighter and sweeter, whereas deep bass caused them to think of the very same beer as more bitter. 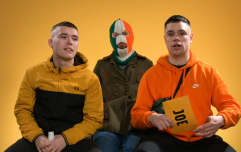 KNEECAP answer the most annoying questions Irish people get asked

END_OF_DOCUMENT_TOKEN_TO_BE_REPLACED

It also found that when the participants listened to music they found pleasant, this enjoyment transferred over into their experience of the beer.

"The results demonstrate that soundtracks that had been specially developed to evoke a specific taste can effectively be used in order to influence the participants' beer tasting experience," the researchers said, according to the report.

This might be why a pint of beer in your quiet pub or at home on a Friday might end up tasting better than a bottle of beer you pick up in a nightclub.

Although the price difference probably has an effect too.

You may also like
Food
Strong Zero: The Japanese 9% ABV low-cost cocktail in can that is becoming a cult favourite in the West
Fitness & Health
What happens when you drink beer before a workout? This study tested it out
Food
Beer before wine 'is not fine' discover scientists in new tests
News
Pilot jailed for trying to fly plane out of Heathrow while nine times over the alcohol limit
Life
Over 25% of young people don't drink according to study
Next Page