And he explained the real reason for Oasis breaking up

Liam Gallagher has sensationally tweeted the reason for Oasis' break up, as well as comparing his brother to serial killer Fred West and calling Paul Weller a plastic mod in a Twitter stream of consciousness James Joyce would be proud of.

Cos if so I'm here all Wk 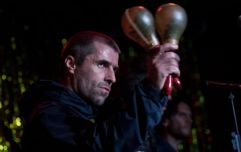 END_OF_DOCUMENT_TOKEN_TO_BE_REPLACED

Fred and Rosemary West were serial killers that committed multiple murders together in the 80s.

The 46-year-old told Liam to "drop dead" after the Mancunian rocker said he “didn’t care” if Sara, Noel, or his “fucking kid” (18 year old Anais) were abused on social media.

After rinsing her, Liam then claimed Sara was the reason a much-anticipated Oasis reunion hadn't happened.

Liam recently revealed in an interview it's been years since he and Noel had a civilised chat. "The last time I actually had a proper conversation with him was in 1998," he said.

What are the lyrics to Married With Children again?

popular
The JOE Friday Pub Quiz: Week 197
The definitive ranking all 151 original Pokémon from worst to best
A definitive ranking of every swear word from worst to best
Here's how to see who's been taking screenshots of your Instagram Stories
This is how much time most men need after orgasm before they're ready for another round
Who is the most handsome footballer in the Premier League?
The JOE Friday Pub Quiz: Week 195