Nothing Kanye does surprises us anymore

This is a man who goes out in public wearing both a MAGA hat and Colin Kaepernick shirt.

We are used to him making random big proclamations – here is his latest.

The rapper has announced in a tweet he will now be known as just “YE”.

the being formally known as Kanye West

"The being formally known as Kanye West. I am YE." 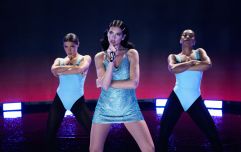 END_OF_DOCUMENT_TOKEN_TO_BE_REPLACED

Rappers switching monickers is not an uncommon occurrence. Sean Combs has officially gone by Puff Daddy, Puffy, P. Diddy, Diddy, and Brother Love at various times over the years. And 2013, Jay-Z made the important decision to ditch the hyphen from his name - only to reinstate it again for years later.

Kanye, however, has always recorded under his birth name.

Ye was also the name of his eighth studio album, which he released in June. A follow-up entitled Yandhi was announced for this weekend, but has yet to appear.