He can definitely afford an official shirt now

Did you ever have a fake football shirt when you were a kid? Maybe you got it on holiday, or from a stall on Oxford Street. The badge probably said something like “Chelsea Football” or “Manchester The Best”. It looked ok form a distance, but up close you could tell how dodgy it was. It was probably also made of cheap polyester and gave you a rash. 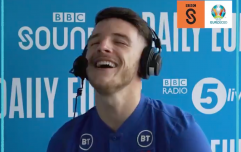 END_OF_DOCUMENT_TOKEN_TO_BE_REPLACED

Ed Sheeran feels your pain. These days he’s a multiplatinum selling, international superstar, and a multi-millionaire. But he knows what it’s like to have a crap fake shirt too.

Before England’s opening World Cup fixture against Tunisia on Monday night, the singer gave the national squad a signed shirt, presumably as a good luck charm (quite why he was giving the team a shirt, when they are not exactly short of them, we’re not quite sure, but still).

The official England Instagram shared to photo, which had a great personal message from Sheeran.

My mum bought me a fake England shirt in 1998 because it was cheaper. It only had 2 lions on it and the kids in school made fun of me for it. Now I’ve sold out 7 Wembleys and I get England shirts for Free. Yay.

That’s a great inspirational message for the lads, isn’t it? Do it for Ed, and all the fake shirt stick he had to endure as a child. 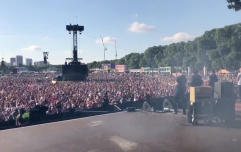 WATCH: The Lightning Seeds playing “Three Lions” in front of 30,000 England fans is as awe-inspiring as you’d expect

END_OF_DOCUMENT_TOKEN_TO_BE_REPLACED

It must have worked though. England beat Tunisia 2-1 last night, with Harry Kane scoring both goals, including a last minute winner.

Sheeran has just finished his current four date run at Wembley Stadium this month. He previously played at the national stadium in 2015, which was released on DVD under the title Jumpers For Goalposts.

On his fourth and final night on Sunday, he wore an Ipswich Town shirt on stage.