"The people in power have misused their power"

Rapper Drillminister has hit out at the demonisation of drill music by politicians, highlighting it as a tactic to distract scrutiny from the real issues affecting the United Kingdom today. 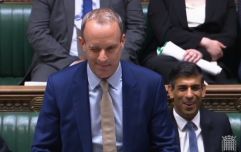 END_OF_DOCUMENT_TOKEN_TO_BE_REPLACED

Speaking in Brighton during the 2019 Labour conference, the London-based rapper - who gained popularity due to the political nature of a number of his songs - told JOE that drill music is understood, perhaps intentionally, to stop people talking about actual problems.

"The people in power have misused their power. And now we've got ourselves to a point where it's irreversible."@MinisterDrill on the misconceptions surrounding drill music and why criticism of it is just a distraction from the real problems taking place in the UK today pic.twitter.com/tqwa8ypraj

He hit out at politicians for abusing their power and for pushing through a Brexit strategy that will hurt the most vulnerable in our society.