"Girl, you killed your goddamn husband"

Welcome to 2020, where Cardi B is feuding with a famous zookeeper. 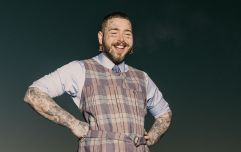 Post Malone praised for posing in a dress for Billboard magazine

END_OF_DOCUMENT_TOKEN_TO_BE_REPLACED

Earlier this week, Tiger King's Carole Baskin criticised the rapper for the use of tigers in her latest video, but Cardi B has hit back saying "Girl, you killed your goddamn husband".

Carole Baskin is of course the big cat rights activist and animal sanctuary founder who found fame earlier this year in the smash Netflix docu-series.

A week ago, Cardi B released the video for 'WAP', her new track with Megan Thee Stallion. As well as including cameos from the likes of Kylie Jenner, the video also features several big cats.

The video became an instant phenomenon, racking up over 60 million views in a week and drawing ire from uptight conservative commentators who wished someone would just think of the children.

But criticism also came from an unlikely source: Carole Baskin.

In a statement to Entertainment Weekly, Baskin said she was "happy to see that it does appear to all be photoshopped.  It didn't look like the cats were really in the rooms with the singers."

END_OF_DOCUMENT_TOKEN_TO_BE_REPLACED

But the footage of the tigers had to come from somewhere, and that is what concerned her.

"That being said, you have to pose a wildcat in front of a green screen to get that image and that doesn't happen in the wild," she continued. "It can't happen in sanctuaries like ours where cats have plenty of room to avoid a green screen (or would shred it if offered access and could die from ingesting it)."

"That tells me they probably dealt with one of the big cat pimps, probably even one of the ones shown in Tiger King, Murder, Mayhem and Madness, who make a living from beating, shocking and starving cats to make them stand on cue in front of a green screen in a studio.  That's never good for the cat."

"[Videos like this glamourise] the idea of rich people having tigers as pets... That makes every follower of these artists, who doesn't know better, want to imitate by doing the same."

Cardi B was asked about Baskin's comments in an interview with i-D.

Her response? "I’m not gonna engage with Carole Baskin on that... Like, that’s just ridiculous you know? Oh, Lord. Like, girl you killed your goddamn husband."