Going out is a story. It's an emotional journey.

A night out has a beginning, a middle and an end. It has peaks, troughs; good times and bad. Though you can't always remember exactly what happened, the feeling of a night out stays with you, like a good film, or a really bad film. 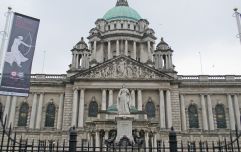 END_OF_DOCUMENT_TOKEN_TO_BE_REPLACED

Are you familiar with Boiler Room? It's not a film. Actually, it is, and it stars Vin Diesel, but has... anyone seen it?

No, this Boiler Room is best known for broadcasting live DJ sets from glamorous locations around the world. One broadcast, coming from Belfast's AVA Festival, featured DJ and producer Or:la, but there was someone in the crowd who stole the show a little.

It looks as if Psychedelic Tiger Shirt Guy might have had a little too much lemonade. We all get a bit silly when we've had too much lemonade, don't we? All those bubbles and all that sugar - it's a zesty old drink, that's for sure.

What Psychedelic Tiger Shirt Guy is, as well as a fizzy pop fan, is a cipher. A metaphor. His five minutes of fame tells the story of every big night out, from the glorious highs to the bewildering lows.

Let's join him on his journey.

Massive Night Out: Act I, Part I

"Life... life is good! I'm so happy to be here in my psychedelic tiger shirt, having good fun with good music and good people. Why can't this just be life? This is what life should be like all the time. I kinda wanna hug someone. Would that be weird? It's all love, man. It's all love."

"Yes. Yesssss. YEEEEEEESSSSSS. That lemonade is really kicking in. That's some fizzy fuckin' lemonade. And this music is gooooood. Oh shit, that's my song! That's my fuckin' song! LEMONAAAAAAADE."

"Shit. This doesn't feel right. Is it my mouth? Fuck, it's my mouth. Why does my mouth feel like it's disappearing? Why does the guy in front of me have a pot plant? How is her t-shirt so... white? Who are all these people? Why has my mouth disappeared? A pot plant? Where did he get that? Should I get my own pot plant? Fuck, I'm thinking too much. Fuck, I need to get out of my head. Fuck, I need a pot plant."

popular
New Zealand to ban young people from ever buying cigarettes
Boris Johnson's wife Carrie gives birth to second child
Ant & Dec make another dig at Boris Johnson and No 10 party cover-up
ITV News' intro to Downing Street Christmas party clip is absolutely brutal
Identical twins trying to get pregnant at same time with shared fiance
Emotional Robbie Savage introduces son Charlie's Man Utd debut while on commentary duty
Met police to review leaked video of Downing Street aides joking about Christmas party
You may also like
News
Belfast riots: 'It feels like a game once you're in it'
News
Bus hijacked and left to freewheel as Belfast violence continues
News
Irish Taoiseach had 'Brits out' view of Troubles before Belfast trip changed his perspective
News
English travel website forced to remove parts of its guide to Belfast after complaints
Sport
Belfast Marathon was accidentally 0.4 miles longer than it should have been
Next Page