The singer chained himself to the gates earlier this week

Musician Will Young chained himself to the gates of a puppy breeding facility earlier this week in protest against animal testing. 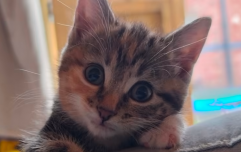 END_OF_DOCUMENT_TOKEN_TO_BE_REPLACED

Young, 42, arrived at the MBR Acres research site at Wyton in Huntingdon, Cambridgeshire around lunchtime on November 16, proceeding to handcuff himself to the gates in a demonstration against the breeding of beagles simply for medical experimentation.

While he is no longer there, his efforts hoped to raise awareness for an issue that often goes unheard in mainstream headlines. He was joined by fellow protesters at multiple points throughout the day.

As you can see, he was joined by fellow campaigners such as members from the Camp Beagle group and explained how this puppy farm creates "over 2000 beagle puppies a year to be sent out to their inevitable torture and death".

Moreover, as Camp Beagle's official page comments below the post, they allege that "shortly after Will left @cambscops [Cambridgeshire Police] helped four vans of crying pups be escorted to their deaths", adding that not only is this animal cruelty but it is also costing the taxpayer hundreds of thousands of pounds.

END_OF_DOCUMENT_TOKEN_TO_BE_REPLACED

The actor, singer and former Pop Idol winner has been an avid activist for many years now, being outspoken as an LGBTQ+ figure as well as campaigning for animal rights.

He is by no means the only celebrity to have called out the cruel practice either; earlier this year, comedian Ricky Gervais teamed up with fellow actor and animal rights activist Peter Egan to lobby for a blanket ban on all animal testing, starting a petition under the Animal Welfare Act.

Campaigners have been protesting against this particular research facility for some time now, the most recent prior to Young being a demonstration back in July of this year. It is one of many puppy farms across the country where beagle breeds in particular are thought to bread for nothing other than animal testing.