What your MSN Messenger profile picture said about you

Remember MSN Messenger? Remember how unbearably cringe every interaction you ever had on it was? WELL YOU DO NOW.

END_OF_DOCUMENT_TOKEN_TO_BE_REPLACED

For many of us, MSN was the true beginning of our post-childhood lives. We learned that although you were socially awkward around your crush in real life, you could also translate that to an online capacity as well. What a treat!

The main hurdle in presenting the coolest version of yourself online was picking a seemingly carefree but ultimately very impressive profile picture. Choose something dumb and you'll be perceived as an idiot, but pick something try-hard and you'll be a virgin forever.

Although the options were limited, there was comfort in knowing that we were all on a level playing field, like trying to make your school uniform stand out from everyone else's despite working with the same hideous raw materials.

Think you nailed your MSN Messenger profile picture? Today's the day you learn that you absolutely didn't. There was no right answer. Soz.

Apologies in advance for the potato quality images that follow. Ideally, all high quality MSN profile pictures appear to have been deleted from the internet forever.

END_OF_DOCUMENT_TOKEN_TO_BE_REPLACED

This profile picture was the early 2000 equivalent of having ~*WaNdErLuSt*~ in your Instagram bio in modern times. You were 13 years old. The furthest you'd been was an all-inclusive holiday to Torquay Holiday Park with your family, which had to end prematurely because you got a verruca from the swimming pool and it got infected. Still, if MSN users could see how worldly you were, so worldly to have a pair of deck chairs and a parasol as your profile picture, they would associate you with travel and broadening your horizons. Nowadays you go on holidays once a year with a partner you're sick of, doing activities you don't like, eating food that gives you instant diarrhoea. But you know what? Every cloud. Your 675 Instagram followers think you're having a good time, and that's all that counts. 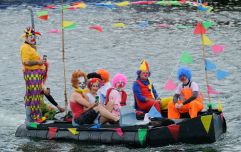 END_OF_DOCUMENT_TOKEN_TO_BE_REPLACED

You weren't really arsed, were you? MSN hadn't a huge grasp on your life, you'd go on every now and then, see who's around and then log off without giving it another thought. Your Mum wanted to keep the phone line clear in case anyone important was going to call at 9pm on a school night. Your unenthusiastic desire to talk to school friends who you'd seen mere hours ago was never going to match her thirst for gossip that came in the form of Sue from work. Nowadays you carry the same disinterest through to everyday life. Your dog rarely gets walked, you don't know how to drive and taxes are an urban legend to you. When's the last time you changed the Brita filter? Bought new socks? Gone dogging? Get it together, the planet is dying and so are you.

Hell-bent on implying that once you reached the legal age, you would become a motorbike stunt person who refused to wear a helmet because danger didn't scare you, this profile picture was a natural choice. You had attention-seeking tendencies from the get-go, sprouting an extra tooth when all your adult teeth came in and telling anyone who would listen. Then you grew up, failed your driving test six times and decided that a life of public transport was the one for you. Suddenly, 2019 came along and you saw an adult scooter for the first time. It was enchanting. Now you whizz to work on one every day, helmet and elbow pads in tow, showing the world who's boss. You hate your job and life in general, but at least in 2003 you were hard as nails.

In many ways, the rocket was a metaphor for your attitude to prospective MSN love interests. You'd chat to multiple people at once, hoping that if you threw enough tennis balls at a patch of velcro, one of them would stick. Then word got around that you were using chat up lines from a toilet book. One of those tiny little 'have a read while you take a poo' books that rich people have in their bathrooms. You stole it from your aunt's house and memorised as many as your tiny brain could carry. You'd fling them at your crushes, only to see them rapidly go offline. Your friends would reveal that that particular contact was still online for them, validating all suspicions that you had been blocked. These days you are a proud Brony and find great comfort in the community.

Cowabunga dude! Weren't you a secret little try-hard? Yes you were. Who's a good little try-hard? It's you. You chose that profile picture in an unironic ironic way. "Hey I'm a sk8r boi lol" you'd announce to no one in particular. All it took was one single person roasting your display pic for you to consider changing it. You hovered over the rubber duck, then the beach chairs, eventually returning to the skateboarder because you wanted to be true to yourself. You were a sheep, you followed the crowd. Your skin turned orange from Sunny D poisoning, that was you - the suspected fake story concocted by parents to get out of buying the stuff. You spread the rumour that the kid off the Frosties advert died from putting pencils up his nose. These days you record conspiracy theory YouTube videos.

Football describes your personality to this very day just as much as it did back in the days of MSN Messenger. Unlike the ball, you had no game. You'd sign in and out of the app in the hopes that your crush, or failing that someone popular from school, would notice you and initiate a conversation about, oh heavens, maybe football? You got in trouble for wearing literal football boots to school, you had the same haircut as your footy heroes, you wrote love letters to your idols and slept in a full United kit. These days all of those things are still the case, except now you have a job and three kids who won't leave you alone when you're trying to have a quick poo before bed.

Sorry to say but you were a basic child, which carried through to your teenage years and ultimately adulthood. There's nothing wrong with being basic, everyone has basic tendencies, but for you it's more of a lifestyle. You'd never spark a particularly interesting MSN chat, the usual extent was 'Wuu2 x' and 'hehe' responses that didn't really garner any meaningful engagement. Usually, that's a personality trait that's reserved exclusively for hot people. They can get away with being boring because their faces are nice, but you were an average looking teen. These days you've had a minor glow up and feel destined to become an Instagram influencer, or at the very least, a short-lived Love Island Casa Amor inhabitant who gets sent home early after salacious tweets resurface online. Follow your dreams!

Ladies and gentlemen please make some room because we've got an intellectual in our midst. You were an absolute nerd at school and although you put in far more work than everyone else, you still maintained that you barely even studied every time you got an A* grade. Nobody bought your bullshit. They saw the cheat sheets and Revise Wise books. You were getting grinds in P.E. for God's sake, that's not something people are going to let slip. Although you got good grades and landed your dream job in the end, you're still just a nerd at heart. You alphabetise DVDs, watch Apple announcement conferences and get up at 4am to see a lunar eclipse. You can't hide it anymore. The only way to truly be free is to embrace your inner self. Buy a Tesla! Be free!

Fam, you were far too young to be on MSN Messenger. Like, criminally young. Anyone that was talking to you, friends and family included, should be on some kind of register. You had nothing to say. Your days consisted of going to school, watching telly, complaining that dinner wasn't something you wanted, then begrudgingly going to bed before The Bill so your Mum could have a moment's peace. Your spelling was appalling, as was your social IQ. These days, all of the above continues to be the exact same, except now you are taller and the resident IT support assistant in your family. Also, you enjoy the company of children far more than is generally healthy and you sometimes linger in the gym showers for too long after you've finished washing.

We get it, you're royalty. You had access to horses and felt comfortable choosing them as your profile picture because they reminded you of Chippy and Chumley or whatever bananas names you gave your equine friends. You had a computer in your bedroom, which was the strongest wealth signifier in the early 2000s and especially prior to that. Parental interference was never a concern because you were truly unloved. No amount of material possessions could distract you from life's most important asset - love. These days you've turned into a real psychopath, killing anyone who crosses you and burying the evidence. You are the Zodiac Killer and no one suspects it. What's that? Those crimes happened long before MSN Messenger was even invented? Sure, that's what you want us to think. Stay woke.

Nice try, Mum. You heard about MSN Messenger when you were chatting to Anita at the parent teacher meetings. She explained how someone died from using MSN because they were groomed by a creep who beheaded them as they slept, somehow all done through the computer screen, defying the laws of time and space as we know it. That was enough for you to intervene, deciding to take action. You forced Dad to set up a fake profile for you and after an argumentative twenty minutes, decided that the whole process was far too complicated for you to investigate, eventually settling on a blanket ban for MSN in the house. "When you're old enough to have your own computer, you can go on MSN all you like", you said as the app was deleted indefinitely. Joke's on you though, it was reinstalled hours later under the code name 'Encarta '95 - Learning Skills'.