What do your dreams actually mean? A psychologist explains

Do you dream that you are falling?

(That last one is actually very common, but people just don't admit it).

We got top psychologists and experts on dreams Ian Wallace to break down some of the most-reported recurring dreams, and explain what they mean.

Do you have a recurring dream where you are falling? Or your teeth are falling out? Or about needing the toilet?

We got a top dream psychologist to explain what they all mean. pic.twitter.com/dtrB4jBSPh 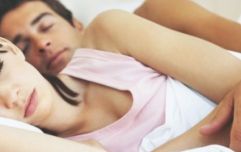 END_OF_DOCUMENT_TOKEN_TO_BE_REPLACED

Instead, it all has to do with language and symbolism, as Ian explains.

Ian Wallace was speaking to us to mark the release of Little Nightmares II.

Little Nightmares II is a suspense-adventure game in which you play as Mono, a young boy trapped in a world that has been distorted by the humming transmission of a distant tower.

With Six, the girl in a yellow raincoat, as his guide, Mono sets out to discover the dark secrets of The Signal Tower and save Six from her terrible fate. But their journey will not be straightforward as Mono and Six will face a gallery of new threats from the terrible residents of this world.

Little Nightmares II is out on 11 February 2021, on Nintendo Switch, PlayStation 4, Xbox One, and PC, and can be pre-ordered now.

popular
A definitive ranking of every swear word from worst to best
TOWIE star Mark Wright is officially the worst player on FIFA 21
Donald Trump's star 'to be permanently removed' from Hollywood Walk of Fame
Ex-Atalanta and Ivory Coast player Willy Braciano Ta Bi dies aged 21
'That Vegan Teacher' banned from TikTok after 20,000 people sign petition to remove her
PlayStation and Xbox users will now be able to play against each other online
Here's how to see who's been taking screenshots of your Instagram Stories
You may also like
Life
There's a strange new theory about why our eyes flicker during sleep
Life
Sir Anthony Hopkins shares inspiring video celebrating his sobriety
Life
Napalm in the morning: Enterprising man flamethrowers snow off his drive
Life
Rapper Bugzy Malone donates sacks full of Christmas presents to disadvantaged children
Life
Penguins comforting each other wins 'Best Picture of 2020' award
Next Page