We've been changing our duvet the complete wrong way for years. We feel like a right set of idiots now.

People use a variety of techniques when putting on their duvet cover. One of the more popular is the 'ghost' technique, where you throw the duvet cover over your head and grab the two corners from within it. 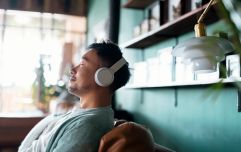 END_OF_DOCUMENT_TOKEN_TO_BE_REPLACED

But you will never go back once you've tried this technique, which is called the 'burrito' duvet.

It's fairly simple too.

You roll your duvet up like a burrito and then place it in the cover through the opening. While holding on to the corners of the open end and the duvet you release the burrito and shake it into place.

Watch how to do it here:

Image and video via YouTube/Yorkshire Linen

popular
Rio Ferdinand and John Terry in Twitter war after controversial 'top 5' pick
Ricky Gervais finally says what we're all thinking about the Johnny Depp Amber Heard case
Japanese man spends £12,480 to look like a border collie - and it kind of works
New Time Traveller's Wife series airs 'incestuous' oral sex scene that has left everyone divided
Maro Itoje explains why he will no longer sing England rugby anthem
Texas school shooter's haunting social media message hours before massacre revealed
Courtroom erupts in laughter after witness’ Johnny Depp statement
You may also like
Life
Woman shares 'genius' hack to stop your windscreen freezing overnight
Food
You've been pouring cooking oil wrong your whole life
Life
A proposition to cancel all human contact and replace it with WhatsApp voice notes
Life
Here's a quick and easy trick that will help you fall asleep faster
Life
This is how to get your luggage at baggage claim before everyone else
Next Page