You've almost got to respect the audacity of the guy

A woman on TikTok has shared her story of the most ridiculous lie that someone has told her - and it came for her ex-husband. 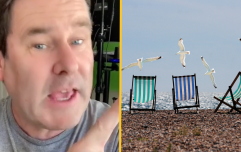 Man shares how to get 27 days off work in a row, using just 10 holidays

END_OF_DOCUMENT_TOKEN_TO_BE_REPLACED

Tyler Paige tells the story of how she saw a picture on Facebook of her husband in a nightclub. The photo had been taken by the nightclub photographer, and was posted on the venue's page. So far, so innocent.

In the picture, her husband was with a group of girls, and whilst this may have raised suspicion, it was a much smaller detail that caught Paige's eye. On closer inspection she noticed that her husband was not wearing his wedding ring in the snap.

When she confronted him about the missing ring, Paige's husband apparently came up with the following whopper of an excuse: they photoshopped it off.

@tylarpaigeI’d love for this sound to go viral because he will know he’s the only idiot that would tell such a whopper!!! ##fyp ##liar ##cheater ##exhusband♬ They photoshopped his wedding ring off - Ty Paige

She then went on to explain in the comments that he later changed his story, probably after realising what a blatant lie it was, and claimed that he must have taken it off to wash his hands and forgotten to put it back on.

And for a hat-trick of fibs, after Paige noticed that his cousin wasn't wearing his ring either, her then-husband claimed that was because the ring was black and couldn't be seen in the shadowy club. Paige later found out that his cousin's ring was silver.

END_OF_DOCUMENT_TOKEN_TO_BE_REPLACED

Another good video to visit the comments here, as several other shared their stories of bare-faced lying.

One user told the tale of how their husband came home with a love bite and claimed that they had simply bruised their neck by hitting it on a toilet. Another commented that her ex was on a dating site and claimed that was because it was an old profile and the site "make accounts of hot people look active to get more people."

A third simply asked: "Why do guys think we believe them when they make no sense"

To that question, this writer has no answer.