This was the most "right-swiped" man on Tinder in 2017

We suppose he's good looking in an obvious kind of way.

We didn't even know this title existed, but here it is, Stefan-Pierre Tomlin was the most "right-swiped" man on Tinder during the year 2017. Cosmopolitan released the list of the 13 most right-swiped people on the dating app earlier this year and Tomlin was revealed as the number one.

The model has previously been on First Dates, Love Machine, Celebs Go Dating and Undressed. Here is his old bio from when he was on the app... 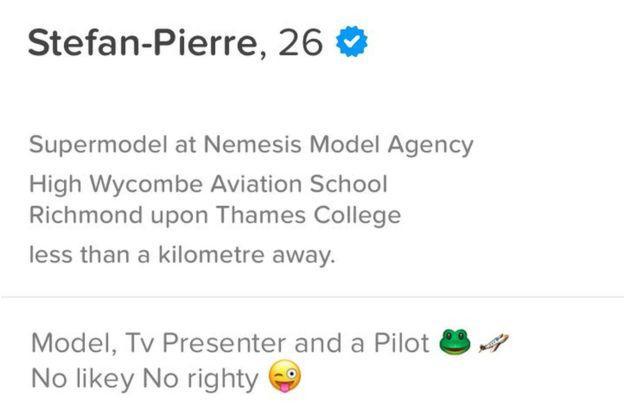 Well, if you've the words "Model, TV Presenter and a Pilot" down as your profession, we imagine it's not going to hurt with getting a match.

The 27-year-old model is now in a relationship with 25-year-old Gemma Fowler, but gave some tips to on how to get some more matches. "Try to be funny or intriguing so it invites people to open a conversation," he told The Independent.

"Women love funny guys, so inject some humour and it will definitely boost your profile."

"Food in your mouth is a big no," Tomlin said,

"Avoid group photos in the first three pictures and don't be afraid to add ones with pets, some people think they're cute! Try to make every picture a different scenario, so not all clubbing or holidays - change it up. Include somewhere you look smart and others where you look more casual."