This trick can get you to get to sleep within minutes

We’ve all heard that we’re meant to get at least eight hours of sleep a night - but it can be tough to do at the best of times.

With the stresses and strains of modern day-to-day life, even managing to fall asleep easily can be difficult. 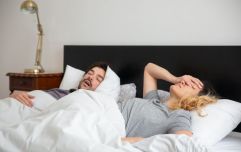 END_OF_DOCUMENT_TOKEN_TO_BE_REPLACED

But science now think that pink noise, a particular kind of background noise, could actually work as a treatment for insomnia.

According to a study recently published in the Frontiers in Human Neuroscience, pink noise is a less intrusive and more relaxing version of white noise.

It can lead to a better, deeper sleep - and if used continuously, could even improve your memory. 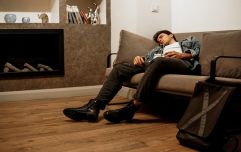 END_OF_DOCUMENT_TOKEN_TO_BE_REPLACED

The research involved people listening to pink noise as they slept

And when they were tested the next day, participants reported feeling a lot more rested. They also performed three times better in memory and cognition tests compared to a standard night sleep. But, in a bit of good news, you won’t have to participate in a scientific study if you fancy trying pink noise to help you drift off to sleep.

There’s hours upon hours of pink noise recordings on YouTube and a number of other apps to help you try and nod off.

popular
People want ‘offensive’ Crown Paints advert banned after attracting hundreds of complaints
Incredible case of the only known individual whose parents were two different species
Jamie Foxx and Snoop Dogg's vampire movie surges to the top of Netflix charts
TikTokers are utterly convinced there is a secret zombie apocalypse going on in China right now
Teacher's sex abuse sentence delayed after she gives birth
Darius Danesh opened up about his health struggles before his tragic death aged 41
Cyclists may have to get number plates under radical shake-up of road laws
You may also like
News
Why you shouldn't sleep naked or masturbate during a heatwave - according to experts
News
Doctor reveals why couples should always sleep in separate beds
News
Sleep deprived medical staff pose same danger on roads as drunk drivers, experts claim
News
World's first human dog bed is finally available for pet owners
Life
Genius lettuce hack 'puts people to sleep in seconds' - and people swear by it
Next Page