This couple has a gentle 7-foot tall, 21-stone bear for a pet

Who doesn't love having a big, hairy, slobbering, adorable pet around the house?

Well, this Russian couple certainly do, except their live-in friend is a 7-foot, 21-stone bear.

In this amazing video from the Caters News Service, we are introduced to Moscow couple Svetlana and Yuriy Panteleenko. They share their home with the bear named Stepan, who is now 23-years-old.

TikToker goes viral for getting face tattoo thinking it would 'fade'

END_OF_DOCUMENT_TOKEN_TO_BE_REPLACED

The couple found Stepan as a three-month-old cub in a forest near their home, and decided to adopt him and raise him as the family pet. Because he has been with them from such a formative age, Stepan hasn't lost any of his gentle ways, which is certainly an interesting twist in the age-old 'nature vs nurture' debate.

Svetlana is quoted as saying: "He absolutely loves people, and is a really sociable bear, despite what people might think."

In the video, we see the couple playing around with Stepan...

...while he helps out with chores around the house, because of course he does.

We even see him lounging around the house with Svetlana and Yuriy as they watch telly. 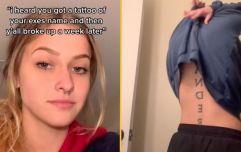 END_OF_DOCUMENT_TOKEN_TO_BE_REPLACED

And if you're wondering what exactly you feed a massive bear, we learn his daily diet consists of a bowl of porridge and 25kg of fish, vegetables and eggs. He also has a bit of a sweet tooth and likes nothing more than slurping away on a can of condensed milk.

(All images via Caters TV)