This needs to be incorporated into school curriculums yesterday.

Folks, there's an epidemic currently taking place across the UK and it's not the thing that rhymes with Pexit. I'm talking about footpath etiquette. 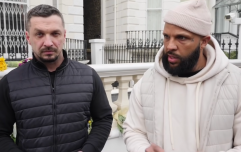 END_OF_DOCUMENT_TOKEN_TO_BE_REPLACED

As we can see, a footpath is defined as 'a path for people to walk along'. Not saunter, not cycle, not drive and certainly not scoot.

So what's gone wrong here? How have we, as a nation, lost the ability to exist together in harmony with mutual respect, consideration and common sense?

I'm not here to point fingers, but everyone is wrong except me.

What follows is the correct way to navigate a footpath. Please read it, re-read it and send it to 5 friends or a decade of bad luck and mediocre sex will ensue.

END_OF_DOCUMENT_TOKEN_TO_BE_REPLACED

Listen, if I'm walking somewhere, I have absolutely no desire whatsoever to end up in some sort of West Side Story standoff between the Jets and the Sharks. We're not going to aggressively but also rhythmically click our fingers out of this situation, so let's avoid it entirely by using our heads.

If you're hip and trendy enough to be hitting the pavements with a group of friends, try distract yourself from Harry's EPIC tales of drunken loutism for a moment to observe your surroundings. You're walking three abreast and the oncoming person doesn't appear to have been gifted with the ability of flight. Rather than reenact an episode of Hole In The Wall, perhaps you could orchestrate a momentary single file formation between yourself and the gang.

This way, everyone wins. We all get to stay on the footpath and preserve our lives for a little longer. Nobody has to fall victim to a bout of blind rage, audible sighing or extreme tutting. Success!

Keep your dog to the inside of the path, you MORON

Dogs are precious, that is not up for discussion. Push comes to shove, I prioritise dogs over humans nine times out of ten, as should you. Just a tip, if you're out for a walk with your four-legged friend, keep him/her away from the fucking road.

This will a) avoid any vehicle-related accidents and b) prevent passers-by from getting tangled in the dog lead or being tempted to pet your dog if he/she is unfriendly or adverse to strangers. It's common sense and absolutely doesn't need to be written down, but at the same time it very clearly does because here I am, writing it down.

Also, would it kill you to put a little neon sign above your dog letting the general public know if he/she is up for a quick rub? Because if I see a dog and get a vibe, I'm going to carefully molest it all over until I feel satisfied (in the purest sense). If your dog isn't keen on that, I need to be warned well in advance of laying eyes on him/her. Thank you.

If you bump into a friend and stop to chat, kindly MOVE THE HECK OVER

Sometimes you'll bump into Darren from your old workplace whilst out on your evening stroll and wind up spending 35 minutes gossiping about dozy Lyndsey's latest monumental fuck up. That's fine.

What isn't fine is taking up the entire width of the footpath telling exaggerated stories with wild arm movements and physical comedy, putting other pedestrians in extreme danger of either a black eye or becoming certified roadkill at poor Lyndsey's expense.

Simply drag yourself and Darren to the inner side of the footpath and spill the tea until there's none left. Alternatively, go to the nearest pub, drink everything, fall in love, get married, have three kids and a dog, then die of a broken heart after 53 wonderful years of marriage. Just a thought!

Excuse the profanities, but I feel quite strongly about this one. If you're a cyclist, it might make sense to keep your bike in its designated lane, or alternatively on the road. If you're going to cycle on the footpath without there being any specialised roadworks-related instructions to do so, prepare to receive the filthiest look the world has ever seen from yours truly.

If we're going to allow cyclists onto our precious footpaths, where does it end? Submarines on the Tube? Helicopters in shipping lanes? Tories in our Government? These things simply do not work well together.

Also, while we're at it, take it easy with the bell on your bike. Yes, I know you're trying to let us know that you're coming, but sometimes you're just ringing it for sport, I can tell.

Learn how to carry a ruddy umbrella properly you SHIT

I'd like to propose a new law where every umbrella user has to pass a theory and practical test similar to drivers before they can operate a brolly in public. It'll cover rudimentary areas such as spatial awareness, appropriate size selection, excess water displacement strategies and height adaptation training in unexpected circumstances.

Too many times I've come uncomfortably close to losing an eye at the hands of a wayward umbrella spike operated by an inexperienced and unqualified technician. When two umbrellas come head-to-head on a footpath, the solution is so glaringly obvious it's infuriating. The person on the inside edge moves close to the wall / building / fence they're beside, whilst raising the brolly to avoid collision. The person on the outside lane must lower their brolly and edge it towards the road if it's safe to do so.

An alternative way to combat an umbrella collision is to simply close down your brolly, run as fast as you can to the nearest airport bus, catch a flight somewhere sunny and set up a new life free from the complexities of how to navigate rain prevention apparati.

Slow walkers must STAY AT HOME

[In the interest of legality, I'm strictly taking about people that deliberately choose to walk slowly, not those that are slow walkers due to circumstances beyond their control].

Slow walkers, you are the scum of the earth. If you want to have a saunter, go to the park or hog a treadmill at the gym for half an hour. Stay the heck away from our heckin' footpaths you devious little shits.

There's no excuse for walking slowly. It's selfish and unproductive. It clearly says the following in the constitution:

"People that walk slowly must retract from society and make an appointment with their local GP to be put down. Society cannot and will not tolerate slow walkers, especially those that choose to do so on our nation's public footpaths. Slow walking is a serious criminal offence that is punishable by death".

If you're a slow walker in 2017, don't panic. There's help widely available and people you can talk to. You need to first decide for yourself that a change is afoot. Call our hotline 1850-WALK-FASTER-FFS. Our operators are waiting to take your call.

Never EVER text and footpath, unless you're very good at it

Roughly 1 in 4,500 people can successfully text and properly navigate a footpath at the same time. If you're lucky enough to be one of those souls, you can skip ahead to the next point, but not before we thank and applaud you for your service. Ok, that's fine, off you pop.

To the rest of us chumps, it's business as usual. If you're going to send a text and instantly become drunk and disoriented with excitement, thereby forgetting the appropriate footpath etiquette detailed above, kindly make your way into oncoming traffic. Alternatively, just move to the nearest inlet on the footpath and carry out your business safely, free from the hindrance of others. Or just wait until you've arrived at your destination and then text away to your heart's content.

A momentary lapse in concentration as you're navigating a footpath can be detrimental. Everyone's heard the classic tale of a pedestrian in London being so engulfed in his phone that he didn't notice an uncovered manhole right in front of him. He fell in, bumped his head and became a Teenage Mutant Ninja Turtle. His name is Donatello and that is his story. Be vigilant.

Statistically, at least one of the readers of this article has stopped still in the middle of a footpath in their lifetime, for whom I have two words: FOR WHY?

What happened that you had to stop in your tracks and cause an ensuing domino fall behind you? I've tried to come up with some explanations:

Either way, it's unacceptable and I'm currently drafting papers to get it brought into effect that any person caught stopping dead in the middle of a footpath can and will be liable to face the death penalty if they can't provide a decent or at least amusing explanation.

Together, we can and will combat the hazardous breed of incorrect footpath users, one way or another. Be safe, be strong and above all else, be vigilant.

popular
Graduate sues University for £4m after 'slipping in puddle' at 2am
Amber Heard 'fought really hard' to appear in 'Aquaman 2' despite pared down role
NASA picture of Mars 'doorway' sparking bizarre conspiracy theories
Boris Johnson slams Jurgen Klopp for defending Liverpool fans booing national anthem
Liverpool fans were right to boo the national anthem
ITV's The Chase star opens up on divorce from ex-wife who is his cousin
Granit Xhaka rips into Arsenal teammates in brutally honest interview
You may also like
News
UK's oldest pub closes its doors after 1,229 Years
Sport
Britain and Ireland set for Euro 2028 bid instead of hosting World Cup in 2030
News
Shocking video shows Queen's Guard trample over child who gets in their way
News
Exact date snow to hit Britain with -5C cold snap on the way
News
Met Office issue danger to life warning as Storm Arwen heads to UK
Next Page