Study shows that the eldest sibling is the smartest

A study conducted by the University of Edinburgh has found that first-born children are smarter than their young siblings. The findings come after the authors of the study set out to find out more about the "birth order effect". 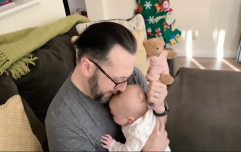 END_OF_DOCUMENT_TOKEN_TO_BE_REPLACED

Researchers say the findings could help to explain the so-called birth order effect when children born earlier in a family enjoy better wages and more education in later life.

For the study, researchers followed 5,000 children from pre-birth to the age of 14 and tested them every two years with reading, letter-matching, and picture vocabulary.

Results showed that first-born children exhibited higher IQ scores than their younger siblings by the age of one.

The results showed that advantages enjoyed by firstborn siblings start very early in life, from just after birth to until after three years of age.

The differences increased slightly with age and showed up in test scores that measured verbal, reading, math and comprehension abilities.

So there you have it folks, if you're the youngest and the least successful in your family, it's not your fault, it's your parents.

popular
'Super recogniser' draws 'accurate' modern Maddie McCann to help police find her
Man with world’s biggest penis says Oscar winner slid into his DMs
Congressman and family pose with guns for Christmas photo days after school shooting
Woman wins millions after suing mum's GP for allowing her to be born
Mum in jail for murder pays tribute to son, 6, killed by his dad and new girlfriend
Bride faints on groom, vomits and gets pooed on during ceremony
The JOE Friday Pub Quiz: Week 272
You may also like
News
Alec Baldwin: Family of killed cinematographer demanding answers
Life
Mum says it’s not right for parents to charge adult kids rent
News
Dad sacked his own son from family firm for refusing to get Covid jab
Life
'My parents secretly did a DNA test on my baby because they didn't trust my wife'
Life
Man finds world’s longest Hula Hoop and wants it to be a ‘family heirloom’
Next Page