When will all the chocolate changes end?

Unless you've been living under a rock, you'll know that confectionery companies are really screwing us over as of late, between redesigns, resizing and cancelling some of our favourites. 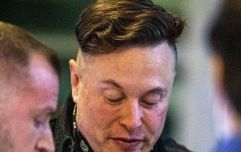 END_OF_DOCUMENT_TOKEN_TO_BE_REPLACED

Only in the last month we've had the Toblerone change, the purple on in the Roses halved in size and then Malteser share bags got smaller too.

And now, in case you haven't already lost all faith in chocolate companies, Quality Street have let us down too.

The famous purple box of sweets will now no longer contain the Toffee Deluxe.

The Toffee treat was part of the selection for the past 80 years and now they've gone and swapped it for something new - a Honeycomb crunch.

While we're sure the Honeycomb is all well and good, we don't like change when it comes to our chocolate.

Suffice to say, people were not happy.

Just read that @Nestle have removed the Toffee Deluxe from #QualityStreet That was my 1st choice every time! Do one 2016 😤

After a huge outcry from customers online, the makers of Quality Street announced that Toffee Deluxe would still be available in selected boxes but only in Tesco and only for a limited amount of time.

''We're incredibly excited to welcome the new Honeycomb Crunch, and were amazed by the response on social media when the cat was let out of the 'purple' bag, and people heard it would be replacing Toffee Deluxe in the standard tub.

We hope people enjoy the new Honeycomb Crunch sweet and want to reassure Toffee Deluxe lovers that they can still find their favourite Quality Street sweet this Christmas.'' A spokesperson said.

So if you're a fan of the Toffee Deluxe, stock up now while you still can.

popular
ITV News' intro to Downing Street Christmas party clip is absolutely brutal
Emotional Robbie Savage introduces son Charlie's Man Utd debut while on commentary duty
Met police to review leaked video of Downing Street aides joking about Christmas party
Majority of people think Boris Johnson should resign, according to new poll
Boris Johnson apologises for a party he says didn't happen
Robbie Savage 'started to tear up' as son Charlie is named on Man Utd bench
Electrician jailed after castrating several men at their request in Germany
You may also like
Life
Quality Street is bringing back one much-loved retro flavour
News
There could be a Quality Street shortage this Christmas
Food
Build your own Quality Street tins are now a thing at John Lewis
Food
Tesco are selling huge tins of Quality Street for just £1.25
Food
Quality Street have announced the return of a crowd-pleaser this Christmas
Next Page