We often complain about the price of food, and what could have ended up being one of the most expensive pizzas ever made was nearly sold in Ireland last night.

JOE reader Mark Hogan told us that when buying a pizza in Apache Pizza in Carrigaline, he was initially presented with the receipt below. 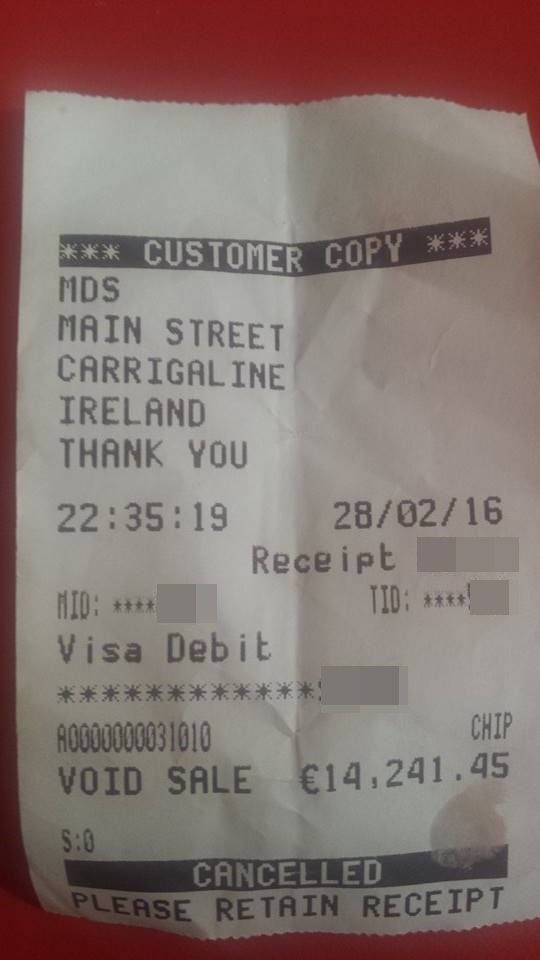 END_OF_DOCUMENT_TOKEN_TO_BE_REPLACED

The order was cancelled, but only because Mark didn't have enough money in his bank account to cover the extravagant costs. Had that not been the case, who knows?

According to Mark, the restaurant was swamped and it was an honest mistake from an Apache employee.

In the end, nobody was hurt and Mark went home with a pizza that cost considerably less than the price of a half-decent new car.

popular
Shocking CCTV shows moment rival gangs engage in fierce gun fight in broad daylight
Aaron Ramsdale wore Arsenal away shirt against Newcastle
BREAKING: Two cases of Omicron variant detected in UK
Rangnick to set Man United squad brutal 'training test' to improve their intensity
Ava White: Tributes to ‘unique and bubbly’ 12-year-old ‘murdered by a group of boys’
'It's England or die' - life inside the refugee camps in northern France
Storm Arwen: Third person crushed to death by tree amid weather chaos
You may also like
News
Salt Bae’s washing up technique is more ridiculous than his prices
Food
You can now get paid to eat Greggs' vegan festive bake
News
Salt Bae sued for $1m by former employees
Politics
UN gives Musk everything he asked for to donate $6B to end world hunger
Entertainment
‘Gordon, Gino And Fred’ to come to an end after this season
Next Page