I promise you, honestly, there isn't that much more we can say about the wedding

Look, I know you're probably starting to get bored of the whole thing by now, but fans have noticed something pretty significant about Harry and Meghan's official photos, so I feel duty bound to tell you about it.

The first official images of the royal wedding were released on the 21 May by Kensington Palace and taken by photographer Alex Lubomirski.

END_OF_DOCUMENT_TOKEN_TO_BE_REPLACED

We've already given the three images a thorough dissection, but one thing, in particular, caught the eye of social media users about the difference between a group shot of the senior royals, along with the bridesmaids and pageboys, and a more informal shot of the couple and just the kids.

In the more formal photo, four-year-old Ivy Mulroney and three-year-old Florence van Cutsem are seen holding a bouquet of flowers. However, in the picture without the senior royals, Florence, who is Harry’s goddaughter, does not have a bouquet.

Which leads to one question: why doesn't a flower girl have any flowers?

Here's what people were saying on social media:

One of a flower girls has no bouquet 💐 https://t.co/UuY75RIsSn 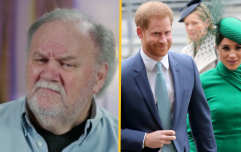 END_OF_DOCUMENT_TOKEN_TO_BE_REPLACED

It does, however, turn out there is a reason.

According to the Daily Mail, Ivy - the daughter of Meghan’s best friend Jessica Mulroney - did not have her own flowers as she was responsible for taking Meghan’s flowers once the bride has reached the altar.

So that's that settled then.