People are freaked out by creepy meaning behind 'Why did the chicken cross the road?' joke

Well we had absolutely no idea about this.

"Why did the chicken cross the road?" 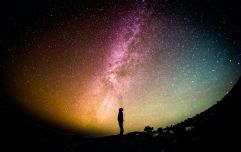 END_OF_DOCUMENT_TOKEN_TO_BE_REPLACED

"I don't know: Why did the chicken cross the road?"

"To get to the other side."

We've all been told and then retold the joke in our youth, and if we're honest, most of us have simply shrugged and accepted it for some reason. But let's have it right, it's not even funny in the slightest.

There's no actual joke there - it's a non-punchline. And yet, for whatever reason, we all continue passing it on to future generations, who are similarly non-plussed and unquestioning about it.

But what the fuck does it actually mean?

The gag first appeared in an 1847 edition of The Knickerbocker, a New York City monthly magazine, and has been going strong for 170 years now, despite the fact that most of us find it largely meaningless.

Some have suggested that it is a perfect example of 'anti-humour', in that the punchline is purposely unfunny by way of an ironic hoax. It is essentially a way of annoying someone.

END_OF_DOCUMENT_TOKEN_TO_BE_REPLACED

But the largely held truth is rather more sinister.

It is believed the true (dark) humour is in the double-meaning of 'other side'. The reason why the chicken crossed the road is because it knew it would die in the midst of traffic, and therefore crossing the road is an act of suicide.

So 'to get to the other side' doesn't mean the other side of the road; it refers to the life after death, and sweet release from this mortal coil. The chicken is a nihilistic and tragic figure who is ready to pass over to the deathly realm.

Explain that to your 4-year-old, the next time you share the gag.