The thought of tarantulas being anywhere near us gives us serious heebie-jeebies, but can you imagine the feeling of being on a plane in mid-air with two of those bad boys?

Well, that's exactly what happened to some unfortunate passengers who were on a flight from the Dominican Republic to Montreal.

Two tarantulas were loose in the cabin, mid-flight.

The Guardian writes that the plane crew did all they could to keep passengers calm, but we can imagine it was a pretty difficult task.

“I was wearing a skirt and a spider crawled up my leg,” Catherine Moreau of Québec told Radio-Canada. “It was during the meal. My husband managed to catch the spider in a plastic container, but it wriggled its legs out. My daughter was crying, she was in shock.”

Some of the flight attendants were also naturally terrified to go anywhere near the rogue arachnids. 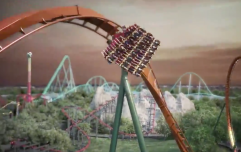 END_OF_DOCUMENT_TOKEN_TO_BE_REPLACED

While one of the creepy-crawlies was captured during the flight, the second continued to wander around the interior of the plane until landing.

The spiders were most likely Phormictopus cancerides, a species common to the Dominican Republic, which are often sold, and there's speculation they were in another passenger's carry-on.

They can grow up to 20cm long.


popular
The JOE Friday Pub Quiz: Week 219
A definitive ranking of every swear word from worst to best
Funeral parlour workers pose with Diego Maradona's body in coffin
Tyson Fury: Going bald is beautiful and should be embraced
Can you get more than 12/15 in this childrens' TV quiz?
Lidl have released a Pigs In Blankets Pizza for Christmas
Donald Trump mocked for delivering speech at tiny little table