Do you see yourself as a "manly man"?

A new YouGov survey has been asking men in the US and the UK how masculine they see themselves - and it appears American men see themselves as being more manly.

The survey findings were investigated in-depth by the Guardian who discovered a generational divide in men's feelings towards their manliness.

It appears masculinity is something older men relate to easier. In the UK only 2 per cent of men age 18-24 described themselves as “completely masculine” compared with 56 per cent of the men age 65 and over. 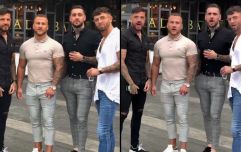 END_OF_DOCUMENT_TOKEN_TO_BE_REPLACED

This could be a case of younger men seeing themselves as boys who have to "learn" masculinity, or a case of the new generation not seeing it as such a desirable trait.

Talking to the Guardian, one UK man who took the survey said masculinity is not a fixed concept since it’s "split by class, culture, location and ethnicity, so it’s very difficult to describe just how ‘masculine’ you are."

Both survey findings, including results on how 'feminine' women in the UK and the US believe themselves to be, can be found here and here.

What do you think? Email us: [email protected], or message us on Facebook.
Podcasts