If you ever fancied yourself as a bit of a James Bond then there's some good news for you, because MI6 just launches a recruitment campaign.

MI6 airs its first ever TV advert today as it looks to attract ethnic minority recruits and expand its talent book more generally.

MI6 has launched its first TV recruitment advert as it attempts to recruit more women and people from ethnic minorities https://t.co/UbI6mXz6IW pic.twitter.com/D4pbg78e7H 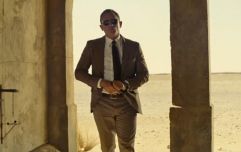 END_OF_DOCUMENT_TOKEN_TO_BE_REPLACED

It depicts an ethnic minority mum and her kid watching a shark in an aquarium - and is thought to be part of a concerted effort to move away from the 'James Bond' image of a spy that prevents a more diverse number of applicants coming forward for jobs in the secret service.

“We are intelligence officers, but we don’t do what you think,” the ad’s voiceover says.“It is not keeping your cool in the shark tank. It is picking up the silent cues that matter.” Then comes the payoff: “MI6 – secretly, we are just like you.”

The service is looking to expand its workforce by bringing in an extra 800 spies by 2021.

So, what are you waiting for spook in waiting?

popular
Two British men raped in Spain after being 'drugged while out on night out'
Groom shocks wedding by playing video of his bride cheating with her brother-in-law
Runner finishes last in 400m race as penis keeps falling out of shorts
Man has hand 'chopped off' outside working men's club in attack like 'a horror film'
Brit tourist, 22, ‘raped by wealthy American holidaymaker in hotel toilet’ in Mykonos
SeaWorld responds after footage showing killer whales attacking each other leaves visitor in tears
Some Stranger Things fans are now trying to cancel Metallica
You may also like
Entertainment
‘There’s no need for a female James Bond', says Ana de Armas
Entertainment
Fans demand Henry Cavill as Bond following actor's new video
Entertainment
Danny Boyle shares plot of his scrapped Bond movie and his choice for next 007
Entertainment
Colin Firth and Matthew MacFadyen reveal their favourite James Bond
Entertainment
Mark Gatiss wants to 'reimagine' James Bond
Next Page