Man loses his wallet at a 2003 festival; those who find it hold a yearly drinking session in his honour

How a single tenner turned into 14 years of cider drinking competitions.

Tim Burrows is a journalist for The Guardian and Vice, among others, and he has revealed how a gentleman contacted him a full 14 years after the Reading Festival in 2003 to tell him that his wallet had been found.

The man who contacted Tim revealed how his friends had found his wallet in a ditch at the festival and subsequently handed it into the Lost and Found, but not before they had relieved it of a (presumably) crisp £10 note.


Tim tweets: 'Been contacted by a man who found my wallet at Reading 2003, took £10 out to buy cider and held an annual drinking competition in my honour.' 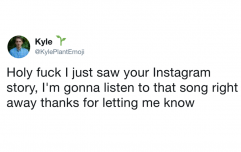 END_OF_DOCUMENT_TOKEN_TO_BE_REPLACED

He then posted screengrabs of their conversation, in which the unidentified man reveals: "Haha I think my friends found it in a ditch near orange and yellow camp in 2003 if indeed it was yours, it was handed into the lost and found, but not before one of them "burrowed" a 10er out of it and bought as much white lightning as he could find... of course looking back on it, that was very childish and illegal but I always thought it would be nice to reach out and let you know that it went down as an annual tradition of cider drinking competitions named "The Timothy Burrows Challenge". Sorry to inform you so many years later, would happily restore karma by offering to pay the £10 back to its rightful owner... I fear now the number of Timothy Burrows I have messaged in my attempt to do this."

All very noble of the unidentified gentleman and his *friend*, you'll agree.

Been contacted by a man who found my wallet at Reading 2003, took £10 out to buy cider and held an annual drinking competition in my honour pic.twitter.com/1a5YyIbpEx


popular
This is the hardest Pokémon quiz you'll ever take
Love Island voting figures have been revealed, and it was an incredibly close call for 2nd place
The definitive ranking all 151 original Pokémon from worst to best
This is how much time most men need after orgasm before they're ready for another round
PlayStation and Xbox users will now be able to play against each other online
A definitive ranking of every swear word from worst to best
Here's how to see who's been taking screenshots of your Instagram Stories