Not sure if you've heard, but there was a small protest in London at the weekend.

The protesters marched from Hyde Park towards Westminster on Saturday afternoon to demand another referendum on Brexit.

Brags about grammar, brags about GEOGRAPHY degrees, linking Brexit with Hitler, EMOJIS, Gucci, being FRENCH, Greek words, using 'EU' as a pun. It was a lot.

With the emergence of such weak content, it has become apparent that the country has lost its goddamn mind and also everyone is obsessed with going viral on Twitter.

Some of these placards were genuinely not bad, but we cannot escape the reality that we are just one A3-printed shitty and exhausted meme away from Brexit coming into immediate effect, government sources are telling me.

So, to avoid a repeat shit show similar to what happened at the weekend, a guide has been drafted by our top team of analysts.

Behold. This is how to make a protest placard that is guaranteed to go viral online.

Whether it's to do with politics or the correct shade of blue that children should be using to colour in the sky during art class, it's important that you know as little about the cause as possible. Don't waste time educating yourself on the pressing matter at hand, instead use all your mental energy fantasising about how good it's going to feel when you go viral. Perhaps a Chuckle Brother will like your tweet, or one of the Loose Women will quote tweet with a cry laugh emoji, heck, maybe a journalist will ask if they can use the image in an article (with full credit to you of course x). 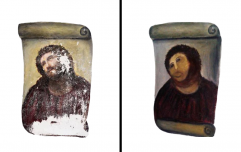 END_OF_DOCUMENT_TOKEN_TO_BE_REPLACED

Your particular dog in this fight is going to be handling the PC side of things, PC of course standing for Personal Clout. Let the diehards deal with any media queries regarding why they're protesting or what the cause really means to them, this is not your area of expertise. Stay as unlit as possible about the protest. All you need to know is the time, place and whether there's going to be 4G coverage in the area. Where words fail, protest placards speak.

This part is tricky, but not impossible. You're going to need to find the least funniest person alive and although this isn't always the case, it's very likely that they're a lot closer to you than you think. Sometimes it's a family member who is addicted to concocting very weak puns at inopportune moments, other times it could be that guy you work with who tries to pass off jokes that he's seen on Twitter as his own but thinks he's being coy enough by changing a few minor details in the premise. Keep searching, I promise you will find them.

Once you've located that person, you must study them intensely. Learn their craft, try to get a glimpse into their psyche. Embody their spirit, stoop lower than them. If they use a 7-year-old meme in their Instagram story to beg followers to stop unfollowing them, you must post an 8-year-old meme. It's that simple. Just don't let on that you're learning from them as the perceived adoration will go straight to their head. Before long, you'll realise it. It's been right there in front of you the entire time. It's you, all along. You are the least funniest person alive. Congrats!

If you've got any kind of experience in Photoshop or design whatsoever, this is not the task for you as you're already horrendously overqualified. This is a job for someone that was never brave enough to open Paint on their Windows 95 computer for fear of the whole system crashing. You need to be the kind of person that struggles to sign their name legibly on a birthday card. Ideally you won't have opposable thumbs or any real sense of how to draw something as innocuous as a triangle. Even if you are Chris Simpsons Artist, you are disqualified.

Once you've been verified as being artistically inept, you must now get to work on the placard itself. Whether it's just going to be text or imagery, you're going to need to execute it very poorly. Don't do a practice run, just go head first into it, etching straight onto the placard using a heavy black marker. If you make any mistakes, simply power through. Written the letters of a long word too big so you'll have to hyphenate and move to the second line? Not to worry. Drawn a fish that looks remarkably like a pineapple? Who cares. Using a yellow marker, the most illegible one of all? Sweet. Keep it up, champ.

Being unfunny and extremely shite at drawing simply isn't enough if you want to go viral. You need a third hook, or a 'throok' if you will. Think of something that's been in the news or public discourse lately. Have Blue decided to release a new single? Is Tina from S Club 7 really into giraffes now? Is there a new previously unseen Monty Python sketch doing the rounds on Facebook? Shoehorn, shoehorn, shoehorn, baby. It doesn't even matter if the two subject matters tie in together, you just need to seem like you're up to date with current events.

For example: Let's pretend you're attending a march about whether or not Peppa Pig gives us unrealistic expectations of pigs. Thousands are inevitably in attendance, all with their smartphones ready to capture your placard. Now, we've just learned that Mel B and Geri Halliwell very probably banged when they were in the Spice Girls together. So you must marry the two subjects by showing the pair in a loving embrace, with Peppa Pig in the middle. Caption it Peppa Spice. Use some glitter. Add a few stickers. Kiss it after applying lipstick. Namaste.

Jesus Christ just get out of my goddamn sight if you're going to be as stupid as to forget this essential step. Do you honestly think a one-sided protest placard is enough to go viral? In this economy? Go away. Then come back with a double-sided expression of your thoughts, thank you very much. Sure, the people standing in front of you will see the front, but what about back row Barry and his wife Esther and their two content-hungry kids? They're just going to look at a white sheet with a giant stick of wood nailed on, is it? Get a fat fucking grip.

While some might simply print their placard twice, you're not going to do that. You're going to add a small caveat at the back because you crave the adoration. In sticking with the example listed above (Mel, Geri, Peppa, et al), you need to find your own version of Looney Tunes' 'That's all folks' message at the end of every episode. I'd recommend something like 'Am I right???' or '...and THAT'S how it's done', maybe even 'Don't forget to like, comment and subscribe'. You'll find what feels right. Make it as shit as possible. Honestly. Ask a toddler for their help.

Right, it's absolutely nonsense to go to all of the efforts listed above without then getting the internet clout you so desperately crave. You're not at the protest to make your feelings known, you're there to get upwards of 1k Twitter likes for a placard that took seven minutes to see through to completion. Walk against the crowd flow if necessary, trample over young children, build a 10ft tall placard so that it can be seen from outer space or at least the Sky News helicopter. This is your destiny and you must follow it through.

Stay close to the edges of the group as photographers tend to run along the sides to get some action shots. Weasel your way to the front when things slow down. If you could wear something eye-catching that would also help matters. If your face isn't plastered with a Getty watermark by sundown, you've failed. Alternatively, citizen journalism can be a last resort. Encourage people to photograph you and upload the image to the world wide web. Get a hashtag going, do some sponsored Instagram posts, hack an MP's Twitter. Stop at nothing, champ.

Step 7  - Go viral (for having a very shit placard)

Should you follow these instructions with the utmost attention, you're going to go viral.

Granted, you'll go viral for being an absolute melt with a very shit placard, but viral is viral and clout is clout.