Call your loved ones and sound the alarm, for Meghan and Harry, The Duke and Duchess of Sussex, have joined Instagram.

They've parted ways with the Kensington Palace account, instead branching out into their own special page dedicated to themselves.

So far, one singular post (containing ten images) has been uploaded.

A post shared by The Duke and Duchess of Sussex (@sussexroyal)

As is only right, we must now critique the post as we would with any standard Instagram user.

Meghan, Harry, if you're reading this, my comments come from a place of sheer adoration and respect.

I simply want for you both to be the best Instagram users you can possibly be.

Now then, let's get critiquing.

Nice colour, nice font, nice use of italics and capitalisation. Everything here is absolutely fine. Except for one thing. The logo is nonsense. Sure, it looks very cool because they have fused the letters 'M' and 'H' together in an incredibly funky way, then placed a crown on top. But here lies the issue. It's impossible to draw the logo without lifting your pen. You start at the top right with the 'M', then go downwards, cross over, hit the left side, loop around and flick to the bottom. But what about the little jagged part in the middle? That requires a second go at it. The logo is misleading. They are lying to us. If they're lying about something as innocuous as a logo, what else are the Duke and Duchess of Sussex lying about? 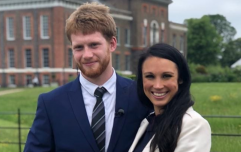 END_OF_DOCUMENT_TOKEN_TO_BE_REPLACED

Nice photograph. Very nice. No qualms here whatsoever. Somebody has shown the Royals that if they add a white border to the edges of the photograph, it tends to stand out a little better on the timeline. I suspect it was one of Fergie's offspring who imparted this essential wisdom. It's nice to see Harry bending down to chat to the kids at eye level as it shows his humility. There's a sea of red, which is same colour as Coca-Cola's branding, so maybe there's a hint of subliminal #sponcon going on here. Also, Meghan shakes hands with her thumb very high in the air, suggesting that she is potentially double-jointed, so that's very exciting news indeed.

Harry and Meghan are aboard a boat in front of the Sydney Harbour Bridge. If they had any banter about them, they would've uploaded this image upside down to prove that they were in Australia at the time, but clearly their social media manager isn't equipped with the necessary internet humour qualifications for the job (call me). Harry is punching the air for no reason in particular, whilst Meghan is clapping at nothing in particular. It's quite cloudy but everyone is wearing sunglasses, meaning a filter could've been applied to brighten the skies, resulting in a believable image overall. Royals - they're just like you and I! They get private boats around Sydney harbour, just like you and I!

Some Royal fanatics are pictured here, presumably awaiting the arrival of the Duke and Duchess of Sussex. Interestingly, they have chosen an image with some inoffensive signs, such as 'Harry' and 'We're suppose to be studying'. The irony is not lost in 'suppose' being spelled wrong, as it suggests that if the girl was spending more time studying, she wouldn't have forgotten the crucial letter 'd' at the end. Everyone is happy and excited at the prospect of seeing Meghan and Harry. This shows that the duo are well-liked, good sports and even security personnel will crack a sliver of a smile in their presence. Regrettably, the girl holding a sign that says 'Choke me Harry' didn't make it into the final cut.

Prince Harry is good at shaking hands and maintaining eye contact, a strict requirement of every Royal family member. This image very clearly demonstrates that indisputable fact. However, everyone in the photograph is completely nude, which is a bold addition to the very first Instagram post from the Duke and Duchess of Sussex. It shows that they're not afraid to have fun and connect with their naked form. It also serves as a nice throwback to Harry's wilder times when he would party in Vegas and then have to reevaluate his friend group after images leaded online shortly afterwards. Also, helicopters are sick.

Meghan is very good at hugs, is the main takeaway here. So good is she at hugs, the sheer force of one singular embrace is enough to drain all of the colour out of an image. This was a brightly coloured scene before the hug took place. Meghan had died her hair to resemble a unicorn. Her face is painted like a tiger. Her arms were dipped in neon green paint for some reason. But then she hugged two people and all of that changed. The photographer was stunned, initially blaming his kit for malfunctioning. He soon realised that the Duchess of Sussex had performed magic. She cancelled colour photography forevermore, and she did it with the power of a simple embrace.

This image proves that Harry isn't afraid to show his naughty side. The cheeky scamp has enlisted the help of five strong men to help him push over an elephant. Harry is a notorious hater of elephants, regularly quoted explaining his distaste for the large mammals. "They are simply too large, it just doesn't make sense. Their noses are too long. I hate them with my life", Harry famously said at the UN convention for elephant welfare. Some may disagree with his views, but Prince Harry is taking a bold stance by including this incriminating photograph into his first official Instagram post. Also, they failed to push the elephant over. It was simply too large. "Told ya", Harry responded.

Meghan is seen here bending down to connect with a fan who is unable to stand. It's a lovely gesture, but we must pay attention to the rogue photo bomber in the background. This little pest saw his photo op and went for it, carrying out the deed to a stunning effect. He didn't pull a funny face, go for bunny ears, nothing major, just a big cheesy smile and a hope to one day be included in the Duke and Duchess of Sussex's first Instagram post. But wait, there's more. If you allow your eyes to wander to the right of the image, you'll notice a small floating head coming from Prince Harry's right thigh. This is wizardry. A second photo bomber has emerged. This is definite proof that Meghan and Harry recognise banter and what's more, they encourage it.

A quartet of presumably Moroccan girls stand blinded by the sun. How does this tie in with Meghan and Harry? Well, the pair famously adore Moroccan people, specifically young girls. Just kidding. They carried out a Royal visit to Morocco earlier this month and as they've very quickly picked up, it's not worth doing anything unless you heavily document it on social media. This shows an acute awareness by the couple about the very core of what Instagram is - a forum for you to prove to others that you have a fun and exciting life that involves travel and tiny little flags. You must admit, they're absolutely crushing it.

The final photograph in the collection shows a tender moment between Harry, Meghan and hundreds of photographers. It looks a bit like they're playing a festival but have been given the 4am main stage slot. Frustrated with their allocated stage time, they persevere regardless, convinced that their true fans will attend. This image was taken right after the encore, where they played the same song four times, as is their trademark gig finisher. After the song final song ended, Meghan got up from behind her drum kit, Harry downed his ukulele/kazoo hybrid and they walked to the front of the stage for a final bow out. Just kidding. But such misleading imagery proves that Meghan and Harry have a remarkable grasp of what Instagram entails - Lying and misleading people to make yourself seem more interesting. Rest assured, Meghan and Harry are going to do just fine around here.