A widow has shared the savage response she gave to her dead husband's mistress after he died.

END_OF_DOCUMENT_TOKEN_TO_BE_REPLACED

36-year-old Bridgette Davis used TikTok to give an account of the really awkward conversation between her and the man her husband was having an affair with before he passed away.

"When your husband of 10 years dies and you have to tell his mistress," the clip was captioned.

She then proceeded to share messages exchanged between herself and her husband's lover.

The response was short and simple: "No."

[Credit: @bridgettedavis08]
Advertisement
Davis and her husband had two kids together. He took his own life back in 2018 after battling with bipolar disorder, New York Post reports. 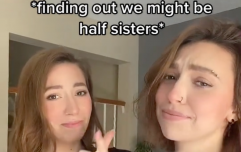 END_OF_DOCUMENT_TOKEN_TO_BE_REPLACED

The 36-year-old widow already knew her husband had been seeing the other woman before he died and decided to message his mistress to let her know the news.

The video showing the messages has already racked up over 1.6 million views - but has left viewers extremely divided.

@bridgettedavis08There is a lot to unpack here.♬ Crazy - Patsy Cline

Some think the wife should have told the mistress where her husband was buried.

“Seems like you texted her just so you could be mean to her and not let her go visit. Either be nice or move on,” one person commented.

“She lost a love too. He wrecked your relationship, not her,” another added.

[Credit: @bridgettedavis08]
However this is not the end of the story.

In another video on TikTok, Davis showed messages which indicate her husband's lover knew he was married when she was sleeping with him before he died.

In a screenshot of messages, Davis said to the lover: "You know he was my husband for 10 years right?

"That we have two amazing kids together? That I homeschool?"

The lover replied: "Yes. I know a lot about things. He needed support. [He] told me him and I were peas in a pod."

Responding to the mistress, Davis said: "We have been together 16 [years]...I know nothing about you. Other than he said you weren't his girlfriend and he broke things off with you..."

[Credit: @bridgettedavis08]
In another video, Davis said she and her husband had separated several months before he committed suicide and that he was not living in their home at the time.

She said her husband had, however, promised he wanted to reconcile shortly before he died.