The ship was stacked high with Bentleys, Lamborghinis, Porsches and more

A cargo ship carrying nearly 4,000 luxury cars has sunk in the middle of the Atlantic Ocean after the vessel caught fire, sending hundreds of millions of dollars worth of automobiles to the bottom of briny deep.

As you can see in a tweet from Marine Group Kenya, the burning cargo ship sank on Tuesday, March 1 around 46 kilometres from the Azores, an autonomous economic region of Portugal where the depth is estimated to be 3,000 metres deep.

LOOK: A burnt-out cargo ship carrying thousands of luxury cars, including Porsches and Bentleys, sank on Tuesday off the Portuguese Azores archipelago nearly two weeks after it caught fire, a port official said.

'Felicity Ace' the ship that caught fire in the deep sea carrying Porches, sank yesterday. The ship lost stability as it sank approx 25 nautical miles, equivalent to 46km, outside the limit of the Economic Zone of Portugal, in an area of which is about 3,000 meters deep. pic.twitter.com/NCjBltxP4P END_OF_DOCUMENT_TOKEN_TO_BE_REPLACED

The ship, known as the Felicity Ace, was on its way to a port in Rhode Island, America from Germany (the vehicles being primarily made by the Volkswagen Group) when a fire broke out on February 16.

While the fire was dealt with at the time and the 22 crew members evacuated, the ship had clearly lost some structural integrity - rough seas only exacerbating the problem - and began to lose stability. 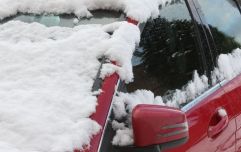 END_OF_DOCUMENT_TOKEN_TO_BE_REPLACED

Joao Mendes Cabecas, the captain of the nearest port on the island of Faial, told Sky News: "When the towing started… water started to come in" and, according to the Felicity Ace Incident Information Centre, the local salvage reported it had sunk around 9am on March 1.

Fortunately, no life was lost as the vessel went down and all members of the crew are said to be accounted for. As for the cargo, it is thought that upwards of $401m worth of high-end vehicles are now on the ocean floor along with the sunken ship.

The cargo vehicle itself has been covered by the company's insurance but cost £116m on its own.

popular
Jordan Peterson suspended from Twitter over Elliot Page comment - says he won't apologise
George Russell abandons car to check on Zhou Guanyu after horror crash
DJ slammed for playing cruel song for prom queen in wheelchair that he claimed was 'perfect'
Groom shoots friend dead by mistake after firing shot in celebration at his wedding
British GP: Terrifying fan footage shows Zhou F1 horror crash
Threesome sees 60-person brawl break out on cruise ship, says passenger
A definitive ranking of every swear word from worst to best
You may also like
News
Warning of road chaos on Monday as fuel protests planned across UK
Entertainment
Ben Affleck's son, 10, crashes Lamborghini
News
Driving with a dog in your car could land you with a £5,000 fine
News
You could be fined £1,000 fine for sharing speed camera locations to friends
News
Watching TV in self-driving cars to be allowed under Highway Code rule
Next Page