The bill would ban games that feature "motor vehicle theft with a driver or passenger present."

Lawmakers in Illinois have introduced a bill that would ban sales Grand Theft Auto V and other games with similar subject matter - citing a rise in carjackings for the move.

END_OF_DOCUMENT_TOKEN_TO_BE_REPLACED

As reported by the Chicago Sun-Time, Rep. Marcus Evans Jr. wants to add an amendment to a 2012 law restricting the sale of violent video games to minors.

His proposed amendment would ban the sale of video games that depict "psychological harm," including "motor vehicle theft with a driver or passenger present."

Evans said: "The bill would prohibit the sale of some of these games that promote the activities that we’re suffering from in our communities."

Evans had been approached by Early Walker, the founder of a scheme called 'Operation Safe Pump', intended to increase security at petrol stations and shopping centres in order to deter carjackers.

"I feel like this game has become a huge issue in this spectrum," said Walker on the issue. "When you compare the two, you see harsh similarities as it relates to these carjackings."

The bill would change also the definition of a "violent video game" to one that lets the player "control a character within the video game that is encouraged to perpetuate human-on-human violence in which the player kills or otherwise causes serious physical or psychological harm to another human or an animal."

That covers a lot of video games. Technically Mario jumping on the head of a turtle would count as causing "serious physical or psychological harm to another human or an animal." 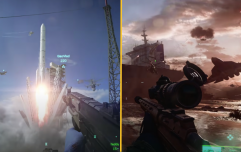 END_OF_DOCUMENT_TOKEN_TO_BE_REPLACED

This is of course far from the first time GTA has gotten into trouble. Most infamously, GTA: San Andreas was found to include a minigame that let protagonist CJ have sex with the in-game girlfriends, that was inaccessible to players, but was unlocked by the fan-made 'Hot Coffee' mod - resulting in the game receiving an 'Adults Only' rating in the US, and being withdrawn from sale completely in Australia.