True, there was stiff competition from the likes of God of War and Red Dead Redemption 2, but there perhaps wasn't a more thrilling gaming moment all year than gracefully swinging around the skyscrapers of New York.

END_OF_DOCUMENT_TOKEN_TO_BE_REPLACED

The game was also filled with little nods and in-jokes for hardcore Spider-Man fans - and one of the biggest sources of those were the alternate costumes you could unlock. Deep-cut references included the suits for Spidey 2099, the Scarlet Spider, and Spider-Punk.

The game's DLC has added more with each installment, but today developers Insomniac announced something very special coming in the next update: the suit worn in the Tobey Maguire-starring movies.

We have a special holiday gift for #SpiderManPS4 players. Today's game update will include a highly requested suit. Hint: It's webbed and it's FREE for owners of Marvel's Spider-Man! pic.twitter.com/6DLTxPFSaE 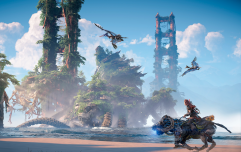 END_OF_DOCUMENT_TOKEN_TO_BE_REPLACED

The costume will be free for everyone who owns the game.

Tobey Maguire starred as Peter Parker in the original trilogy of movies - 2002's Spider-Man, and its sequels in 2004 and 2007. All three were directed by Sam Raimi, and were the first time Spidey has appeared on the big screen.

The first two movies are still considered by many fans to be amongst the best superhero movies ever made. The third installment was much less well-received but they did give us Peter Parker's evil dancing.

Maguire was replaced by Andrew Garfield for the two Amazing Spider-Man films. They were not good.