"It is a game that, until recently, would have been impossible."

The original title in the series of the same name arrived on the humble PlayStation 2 all the way back in 2005, and proved an instant hit with gamers and critics.

Taking on the role of Kratos; a ferocious Spartan warrior with an axe - or, in this case, blades attached to chains - to grind against Ares; the fierce God of War.

The series has been mostly quiet of note since God of War III on the PlayStation 3 in 2010, and its remastered form on the PS4 five years on.

As such, fans have been waiting patiently for the next adventure proper; God of War.


Yes, they've done that irritating thing where they pretend the other games never existed and here's the original name for a whole new generation.

Here's a taste of what's coming next weekend: 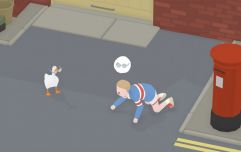 Untitled Goose Game - the silliest game ever made

END_OF_DOCUMENT_TOKEN_TO_BE_REPLACED

And with the game just days away from release, the first official reviews have landed, and we might be looking at a modern classic here, perhaps one to even rival The Last of Us, which the game isn't too subtle about trying to emulate, let's be honest.

Metacritic currently houses an average score of 95 based on 85 critics.

Here's a round-up of the most mouthwatering scores and quotes...

"I’ve played through five God of War games as this character, and never saw him as much more than “the tough screamy guy that’s gonna kill all these gods in hilarious ways.” Now, I find myself just as invested in the quiet conversations Kratos has with Atreus as I do with my newest weapon upgrade. God of War grew up, and the result is the best entry in the series." Giant Bomb

"There’s still plenty of gore, but now the guts have meatiness. Some die-hard fans may fear this isn’t really God of War. I suppose they’re right. It’s even better." Polygon

"It is rare to play a game so accomplished in everything it sets out to do. God of War is a standard-setter both technologically and narratively. It is a game that, until recently, would have been impossible." The Guardian

"The benchmark has been set firmly for the future of video games. A masterpiece." God is a Geek

"The final question really isn’t about where it sits in any game of the year discussions, but rather its place in eventual game of the generation talks." GamesRadar


popular
What is 'Everton'? A series of questions, answered
THE JOE FRIDAY PUB QUIZ: WEEK 174
Roy Keane is angry at everything bar his own tedious punditry
Tickets for UFC London are about to go on sale
QUIZ: Identify which European clubs these 20 badges belong to
QUIZ: Name the English Football League clubs beginning with the letter ‘B’
How will Liverpool's new Nike shirts look next season?

You may also like
Entertainment
FIFA 20: Career Mode additions fail to conceal a shallow experience
Entertainment
Forcing someone called Kyle to play Kyle Simulator
Gaming
An extremely useful guide to being a massive dickhead on FIFA 20
Gaming
Crash Team Racing Nitro-Fueled is exactly as you remember it, for better or worse
Entertainment
QUIZ: Tell us the name of these PS1 games from their screenshots
Next Page