The Spider-Man star takes the lead role in the long-awaited adaptation of the uber-popular Uncharted PlayStation games.

Tom Holland is noticeably younger than Nathan Drake in portrayed in the majority of the games. This is because the film is set to serve as a prequel to the series, detailing the origins of Drake and his mentor Victor 'Sully' Sullivan

Uncharted 3: Drake's Deception featured flashback scenes to a young Nathan Drake, so it is likely that that game will inspire the movie's plot somewhat.

Sully is being played by Mark Wahlberg in the film.

Tom Holland shared the first image on his Instagram. It was not the only look at the film posted online today though.

Voiceover artist Nolan North, who provides the voice of Drake in the games, also tweeted some pictures.

Like looking into a mirror! Proud to have @TomHolland1996 continuing the Drake legacy! Absolutely smashing it!
Thanks for the set visit!!@unchartedmovie pic.twitter.com/sfiFYUJVyH 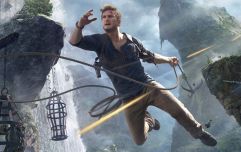 END_OF_DOCUMENT_TOKEN_TO_BE_REPLACED

North shared a photo of him and Tom Holand coming face to face on the set of the film.

He also included photos of some props from the film. One showed a copy of The Life of Ferdinand Magellan, and the First Circumnavigation of the Globe, a 1890 biography of the explorer. The other was of a treasure in some sort of catacomb, which is a very Uncharted image.

popular
Uproar over VAR decision to rule out Ollie Watkins' equaliser against West Ham
A definitive ranking of every swear word from worst to best
Moderna vaccine trial shows 100% efficacy in dealing with severe Covid-19 infections
QUIZ: Fill in the missing club from these players' career paths - Part 6
Troy Deeney criticised for comments on David Luiz's collision with Raul Jimenez
People who refuse COVID vaccine could be banned from football matches and the cinema
Rob Holding calls Adama Traore a ‘brick s***house’ after dubious foul
You may also like
Film
The hardest Spider-Man movie quiz you will ever take
Entertainment
Tom Holland's guide to being a good big brother
Film
Spider-Man: Far From Home is the first Marvel movie to collapse under the weight of the MCU
Entertainment
EXCLUSIVE: Tom Holland reveals he was meant to have a cameo in Spider-Man: Into The Spider-Verse
Entertainment
Spider-Man heads to the UK in the first Far From Home trailer
Next Page