0-0 between Burnley and Barnsley at half-time, thanks to VAR. 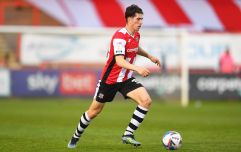 END_OF_DOCUMENT_TOKEN_TO_BE_REPLACED

Matej Vydra receives an absolute pearler to play him right onto the penalty spot. Brought down, a penalty is awarded. Then, just as Vydra runs up to hammer the resulting spot kick, referee Simon Hooper gestures the dreaded signal. VAR.

This video shows the sentiment of the Burnley fans at Turf Moor.

Trust VAR to go against us... just as Vydra is about to step up and smash it home 🙈🤣 #twitterclarets #BURBAR #FACupThirdRound pic.twitter.com/sLoWwsz4G5

Sean Dyche was apoplectic. Then riddled with disbelief. In the past he has said he is "a big fan" of VAR. We'll see if that's still the case.

At the close of the half, Barnsley's Cameron McGeehan headed in a nice ball from the left but his goal was also ruled out for offside. No need for VAR this time though. Clear space between him and the back foot.

popular
Scotland international rugby star Siobhan Cattigan dies aged 26
Woman wins millions after suing mum's GP for allowing her to be born
A definitive ranking of every swear word from worst to best
Elon Musk shares 'evidence' we are actually living in a simulation
Here's how to see who's been taking screenshots of your Instagram Stories
Nasa warns 'concerning' asteroid will break into Earth's orbit in a week
Omicron symptoms: What you should be looking out for
You may also like
Sport
AFC Sudbury deny fan who shouted 'black c***' at player was being racially abusive
News
No punishment for Palestinian flag celebrations after Leicester's FA Cup victory
Sport
QUIZ: You have 90 seconds to answer this tricky football question
Sport
Bruno Fernandes training ground story proves he was perfect man for free-kick
Sport
Tottenham give Marine players fresh shirts after Covid protocols prevent shirts swaps
Next Page