Roy Keane says he doesn't like players who smile

"I never liked players who smiled on the pitch, you are there to win, remember."

Speaking on Sky Sports with Micah Richards, Roy Keane expressed his disdain for players who smile on the pitch. We think he was joking though Maybe. A bit.

END_OF_DOCUMENT_TOKEN_TO_BE_REPLACED

Richards was proclaiming how much he loved playing football in general, and what an honour it was to get to do it at the highest level.

Speaking about Newcastle ahead of their match with West Brom, Micah Richards said the players just need to "go out there and enjoy it."

"I always love players when they are playing football with a smile on their face," he continued. "A lot of players now look like they've got the world on their shoulders."

"I regret the day I didn't smile every time I was on the pitch because it is such an unbelievable..." 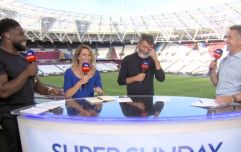 END_OF_DOCUMENT_TOKEN_TO_BE_REPLACED

At this point, Richards trailed off, as he could tell Roy Keane was having none of it.

"I never liked players who smiled on the pitch," joked the Manchester United legend. "You are there to win remember."

"You can win, but you can have a smile on your face?" Richards then suggested.

?"I always love players playing with a smile" ?

?"I never like players who smile, you are there to win remember, not for me" ?

It seems like Micah Richards and Roy Keane were having fun together ahead of the Manchester derby, with Richards also posting this clip on them behind the scenes.

Why so shy Roy??? ? We’re both with @KellyCates at Old Trafford for @ManUtd v @ManCity live now on @SkySports. First up @NUFC v @WBA. ? ⚽️ pic.twitter.com/CbIQqjuZKd