It has been, as they say, a meteoric rise for Jadon Sancho since the former Manchester City youngster made the bold decision to move to Borussia Dortmund for £8 million in August 2017.

END_OF_DOCUMENT_TOKEN_TO_BE_REPLACED

The 19-year-old has proved a revelation for Dortmund in his sophomore campaign, scoring 11 goals and is currently leading the Bundesliga with 13 assists, enough to earn the Camberwell-born winger a call-up to the England senior setup in October and four caps to date.

Unsurprisingly, heads have been turned by Sancho's electric displays at the Westfalenstadion with Manchester United and now Real Madrid reportedly weighing up a move.

Given that United look destined for a season in the Europa League next year, the door is open for Real Madrid and Zinedine Zidane to pounce, even if Sancho won't come cheap.

German newspaper Bild has reported that Dortmund are playing hardball with their latest wonderkid, as they did so effectively with Ousmane Dembele the same month Sancho joined, picking the newly Neymar-less Barcelona up and shaking them by their ankles to the tune of €105 million plus €40 million add-ons (around £125 million altogether). 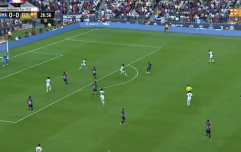 END_OF_DOCUMENT_TOKEN_TO_BE_REPLACED

For Sancho, the BvB are demanding an eye-popping $180 million (£156 million) for their prized asset, which would typically be enough to rebuff any club. Any club, that is, other than the one in question and maybe PSG if they were feeling particularly frivolous.

With Chelsea's Eden Hazard, Manchester United's Paul Pogba and Tottenham Hotspur's Christian Eriksen all heavily rumoured to have been jotted onto Zidane's shopping list along with the Englishman, it remains to be seen who exactly Florentino Perez stumps up for as Real Madrid attempt to rebuild a squad that has disappointed in both La Liga and the Champions League this season after the loss of Cristiano Ronaldo.

There's nothing quite like being able to throw an infinite amount of money at a problem until it goes away, is there?