It's that time of year where leaked pictures of Premier League clubs' kits for next season appear online on a daily basis but this is a bit more reliable than a photograph appearing on a random fan's Twitter feed.

END_OF_DOCUMENT_TOKEN_TO_BE_REPLACED

Manchester United's home kit for the 2019/20 season appeared online on Tuesday, when Sports Direct accidentally featured the new home shirt on their website before removing it.

The leaked images appear to confirm the rumoured nod to United's legendary treble-winning season 20 years ago, as well as a radical change to the club's crest.

The new badge will be a part of the crest which resembles the one that featured on United's European shirt from the late 1990s.

United will also return to white shorts next season, while black socks will complete the strip.

The club has yet to confirm the official release date for their new home kit but the surprise has most definitely gone out the window thanks to the sports retailer's gaffe. 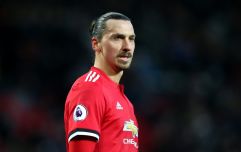 END_OF_DOCUMENT_TOKEN_TO_BE_REPLACED

The latest offering from adidas has also been rumoured to include references to the injury-time goals from Teddy Sheringham and Ole Gunnar Solskjaer in the 1998/99 Champions League final in Barcelona, which is fitting given that next season will be Solskjaer's first full campaign as Manchester United manager.